Happy Veterans Day to My Marine

Every year on November 10, we make note of the Marine Corps Birthday (1775). Every year at church, on the Sunday before Veterans Day, I love watching my husband, as the pastor asks the veterans to stand. I don’t think Russell realizes it, but he always stands at attention, very proud to acknowledge that yes, he served his country. And he loves it when someone says, “Thank you for your service.” He was proud to serve.
In his case, he served in the Marines, during the Vietnam war. That equated to a tour of duty “in-country.” He passed the USMC Officers’ Test between the semesters of his senior year in college (January 1969). We had been married 16 months.
After his exam that day in Kansas City, the USMC officer called me to join my husband, as he was sworn in as a USMC Officer Candidate, with the understanding that as soon as he graduated from college (the following May), he would “belong” to the USMC and would begin his training that summer.
That January day, after the swearing in, the officer looked at me directly and said this: “I can assure you that during his three year enlistment, he will spend a year in Vietnam. But I can also promise you that when he goes, he will be prepared to take care of himself.” That assurance and that promise—both came true.
The following August, Russell left for 10 weeks of Officer Candidate School in Quantico, Virginia. I stayed with my parents during that time, taking a break from college for that year. 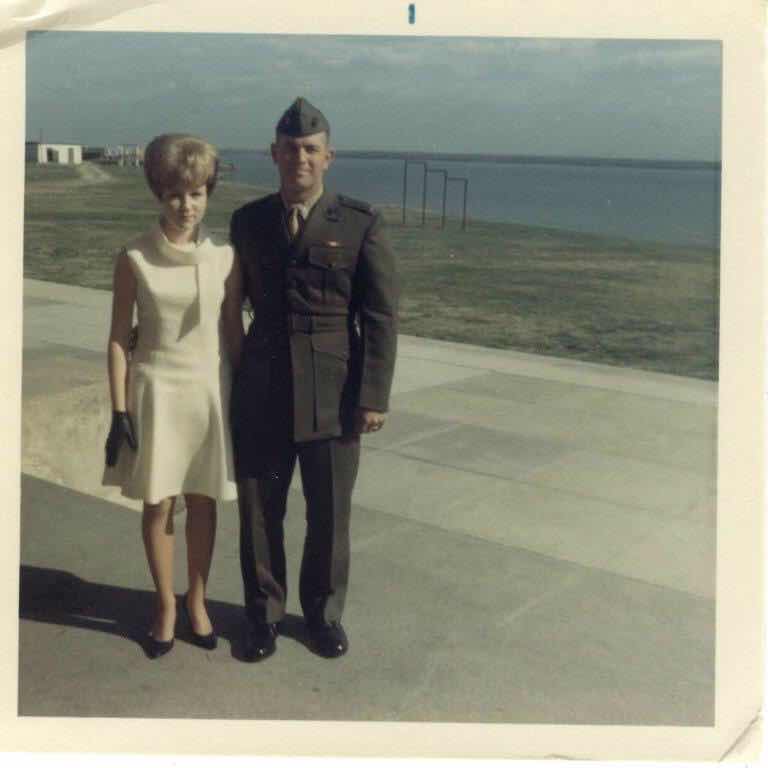 After OCS, I joined him in Quantico for his commissioning as a 2nd Lieutenant.
Then we lived in an apartment in Triangle, VA, during his 5 months of The Basic School. During OCS and TBS, Russell learned to be a USMC Officer. While he was in TBS, I learned how to be a USMC Officer’s Wife. 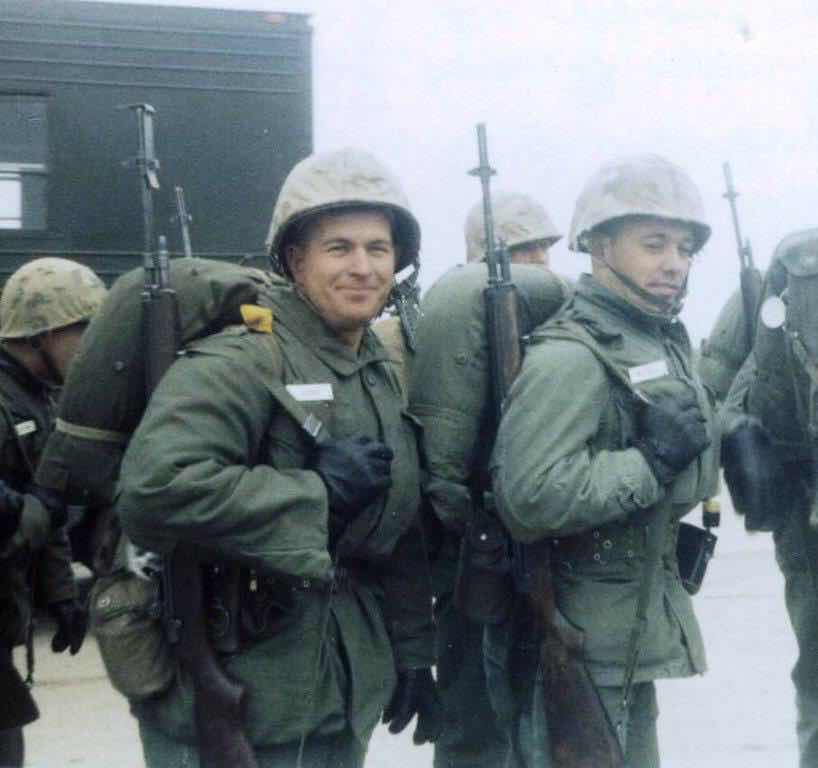 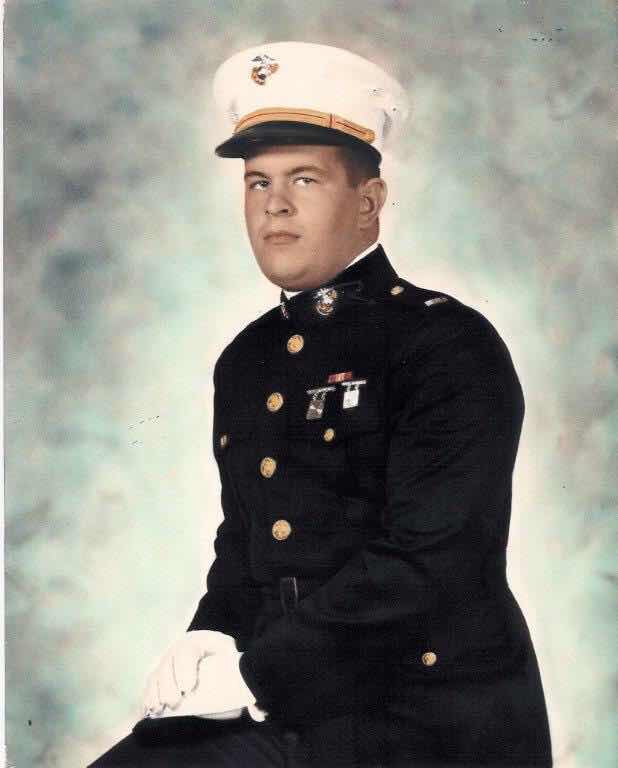 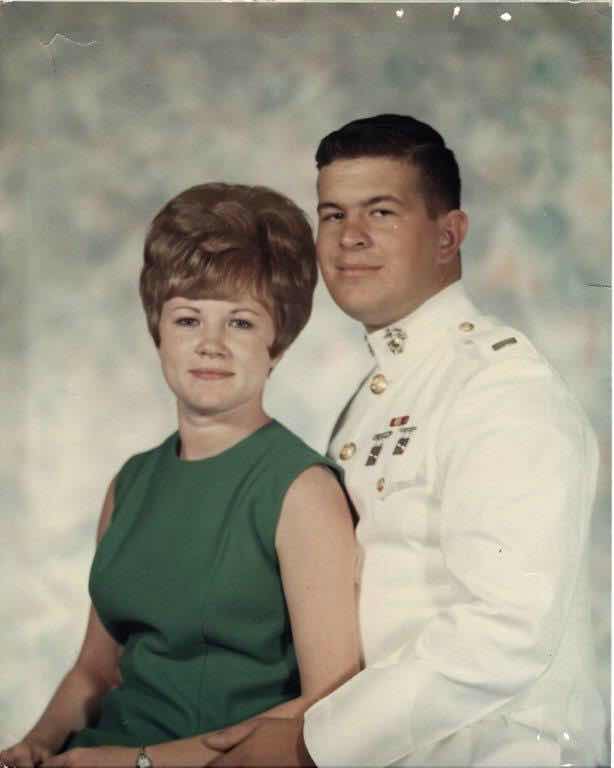 May 25, 1968
These studio pictures were required by the USMC. Isn’t that strange! They also required that the officer (all were on their way to Vietnam) have a will. 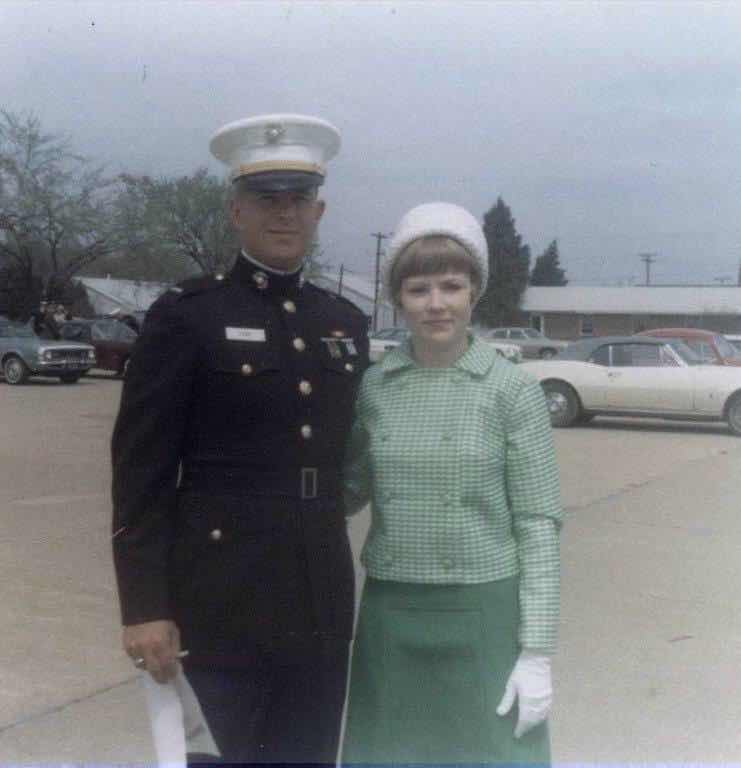 Graduation from TBS was an important event. Note my hat (part of my training as an officer’s wife was proper attire—at any event in the afternoon, a lady was to wear gloves and a hat...and by the way, the Marine wore a “cover”—not a hat—ladies wore hats, men wore covers).
After a brief leave, we were stationed for several weeks at Camp Lejeune, North Carolina, where Russell was in Supply School, as his MOS (Military Occupation Specialty) was Logistics & Supply.
At the end of that time, he received orders for WestPac. He first went to San Diego to train a group of men, then to Okinawa briefly...and then, as promised (and dreaded) to Vietnam. 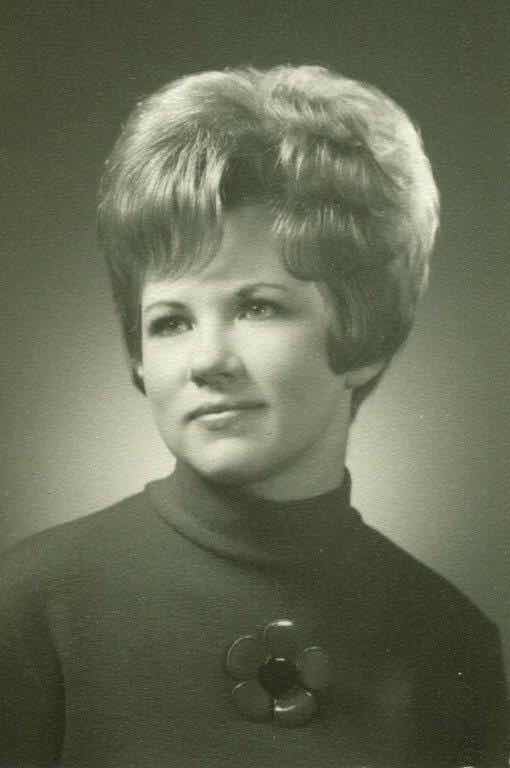 Thanksgiving 1968, I had this studio portrait made to send to Russell in Vietnam. I was wearing the dress he sent to me while he was in Okinawa (for our third anniversary). 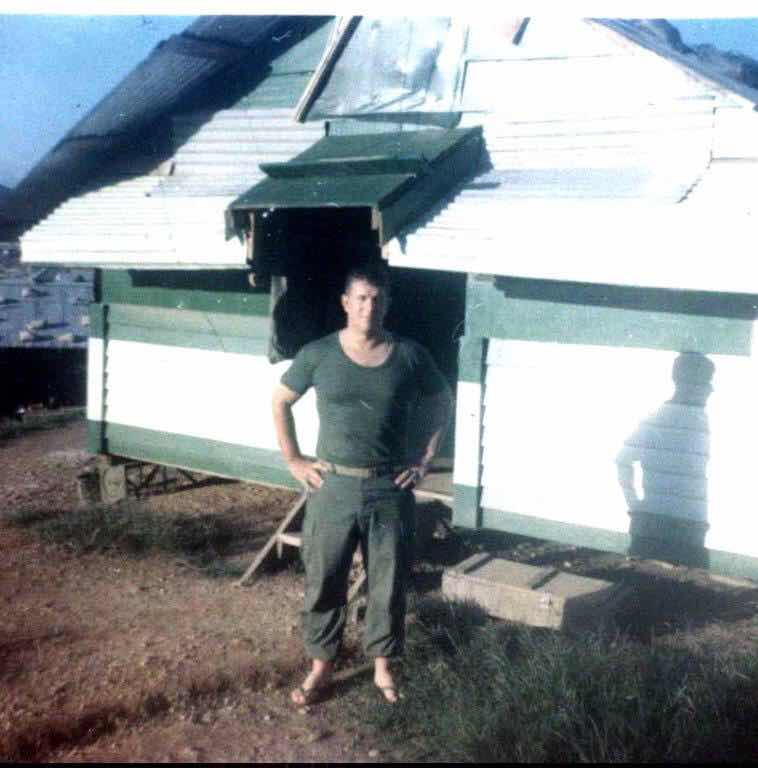 January 13, 1969 Outside his hootch, stationed way west of DaNang 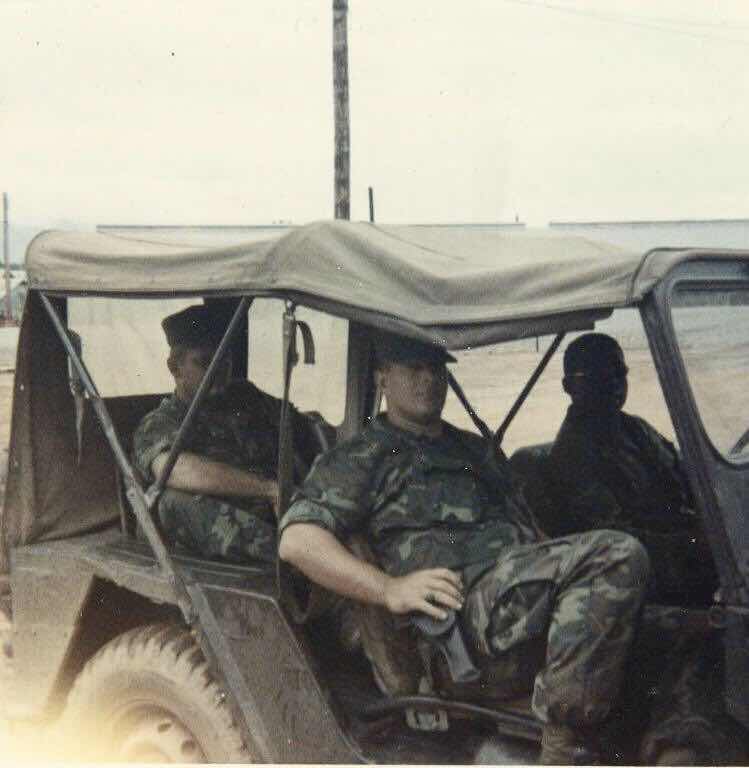 1969 (Driver Cpl Bundick, back seat Sgt Flohre)
Russell carried the .45 at all times. 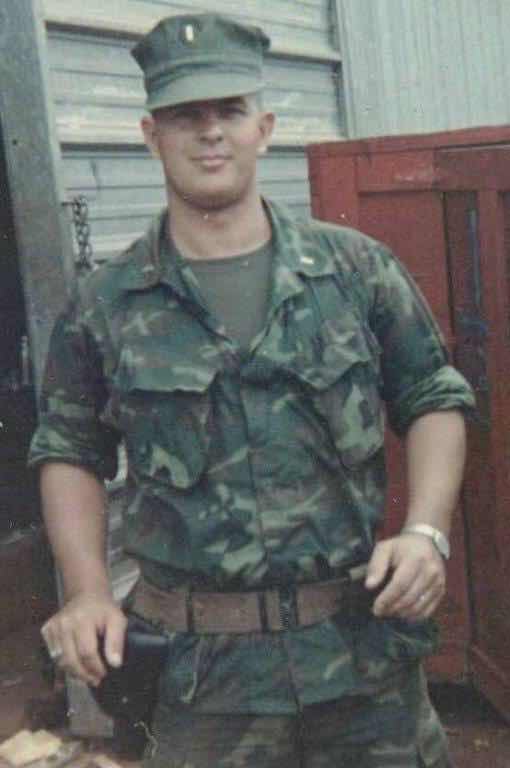 At the Supply Warehouse near his compound 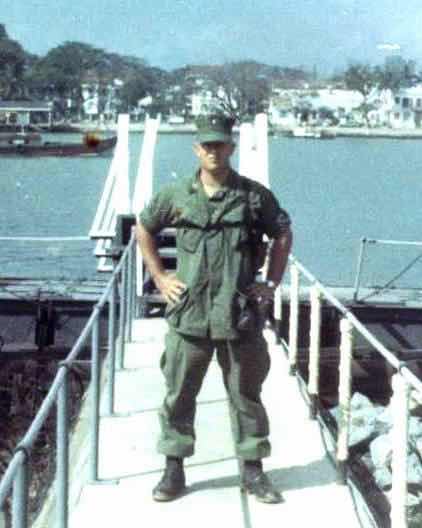 In DaNang, getting supplies from the Supply Compound 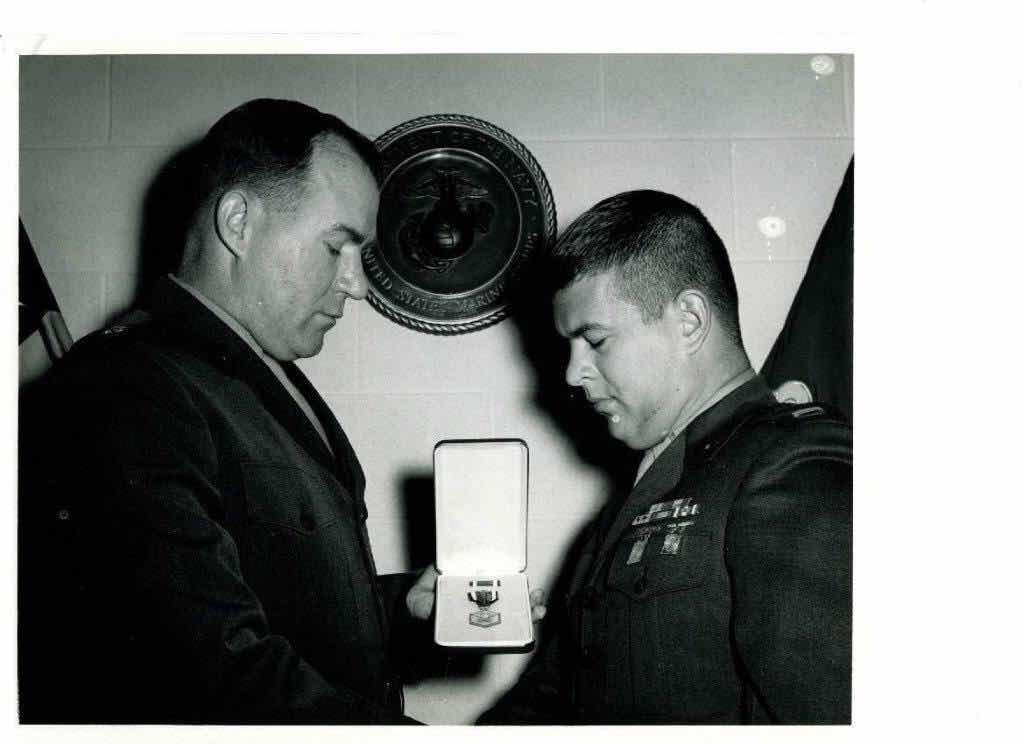 During his time in Vietnam, he made the rank of 1st Lieutenant and was awarded the Navy Commendation Medal with Combat V.
While he was in Vietnam, I finished my college at Southwest Baptist College, graduating a summer after most of my 1969 classmates graduated in May, though I had been out of school for a year.
We have always been amazed as we call to mind how God protected Russell during his time in Vietnam, during his experience in a very real war. There were times when it was so clear that his protection was directly from God.
After he returned in early September 1969, we were ready to move forward with our lives. We were stationed at Camp Lejeune, where our son was born June 18, 1970. In July 1970 we moved back to Missouri (both of us had teaching jobs). With a few weeks left of enlistment time, Russell received word that he had achieved the rank of Captain.
The rest (as well as the previous) is history. That history is our legacy. We have two adult children, four grandchildren, and a great grandson. (That baby boy born at Camp Lejeune, after Vietnam, is now a grandfather.) Almost daily we see affirmation as to God’s plan for our family, as a result of His protection and provision during the war years.
Happy Veterans Day to my Marine
Once a Marine, Always a Marine
Once a Marine Wife, Always a Marine Wife
#onceamarinealwaysamarine #vietnamvet #usmcofficer
Posted by Barbara at 11/10/2019 03:18:00 PM

What a beautiful post! My two youngest brothers are both veterans and I am so very grateful for all of the men and women who have served our country! I can't imagine how hard it was for you, as his wife, as he served all of those years. Thank you for your example of supporting him through it all. I loved seeing all of the old photos, precious memories I'm sure.