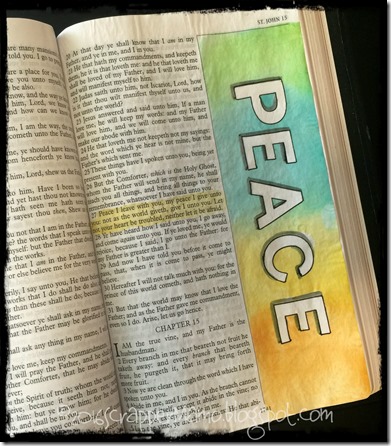 On February 29, 1956, my almost-30-year-old father was at a crossroads in his life. He was without a doubt on a destructive, downward-spiraling path. It was on that day that he picked up a Bible that was on the arm of the sofa (where my mother had left it the previous night). The Bible fell open to this passage:

He read the verse. In his words, he realized this was what he had been seeking. Peace. Not a peace that could be found in the world. God’s peace. Even better, the promise was accompanied by a comforting word about a result of God’s peace—an untroubled and unafraid heart.

That day, he gave control of his life to Christ and committed to follow His leading for the future.

I have always marked that day as a turning point, not only in Daddy’s life, but in the lives of his immediate family at the time (my mother, myself and my three younger siblings). But as time has passed, I have added that it was also a turning point for future generations.

So many things could be traced back to that decision that day. Among them, as a direct result of his decision to claim the promise in John 14:27:

He accepted God’s call to preach. He took our family to Ouachita Baptist College (Arkadelphia, Arkansas) and earned a degree in New Testament Greek.

He was subsequently called to pastor Pleasant Hill Baptist Church (near Jefferson City, Missouri), where I met my future husband (and my sister met hers, my husband’s brother).

Everything in my life from that point was a result of his following God’s call to pastor that church.

My husband and I have been married 50 years. We have two children.

Our son is a pastor. He met his wonderful wife at Southwest Baptist University where he was preparing for ministry. They have two adult children now.

Our son’s daughter has long felt God’s missional call on her life. She is this week graduating from a Christian university and already accepted into the Journeyman Program with the International Mission Board, leaving this summer to spend two years as a short-term missionary in Mexico.

Our daughter’s life is a blessing and actually a ministry to many. She is well on her way to finishing a master’s degree in counseling at seminary and feels called to Christian counseling. Her beautiful daughter and awesome son know that God also has special plans for their futures.

And my siblings could write similar stories, broadening the evidence of my thesis. Though their stories are not mine to tell, I will mention my sister who married my husband’s brother, how he became a pastor, and how they served as international missionaries for many years and even today are pastoring a church. I will mention my brother who is today serving as the Worship Arts Pastor in a church, continuing his years of influencing many for God’s kingdom.

Yes, I could boast on and on about my family, my children and grandchildren. But in this case, my purpose is to boast about God, and to show that one person’s reading of this verse, and making an about-face, life-changing decision to accept its promise, has not only eternal consequences but also unending and ever-reaching results.

And, honestly, the story continues… 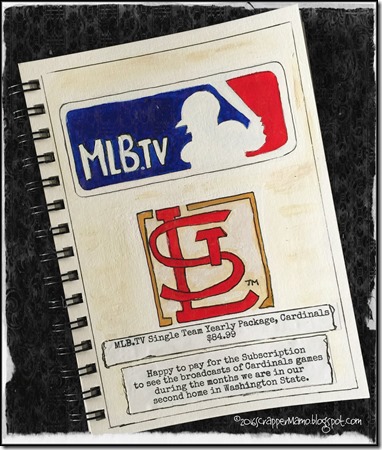 Okay, this is a strange one. But, I’m determined to stay on track with this weekly journaling challenge from Jennifer Frith. 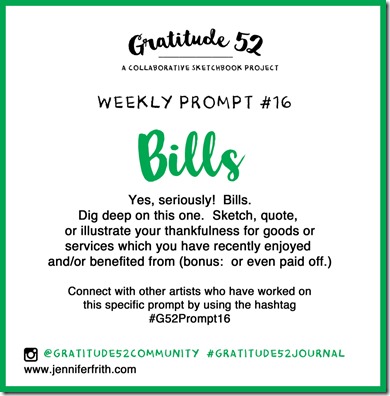 This is what my weekly prompts look like. This one, ugh. Racked my brain until I thought of how glad I am that we can subscribe to MLB.TV for the Cardinals games during the months we are living in our second home in Washington. We are huge fans!

This is obviously a sketch, and it’s pretty rough, but it was fun!! I used acrylic for this one, so that I could get the bright, true colors for these logos. Out of my comfort zone with acrylic, which is funny, since that’s all I used for a while when I first started with “artsy” stuff! 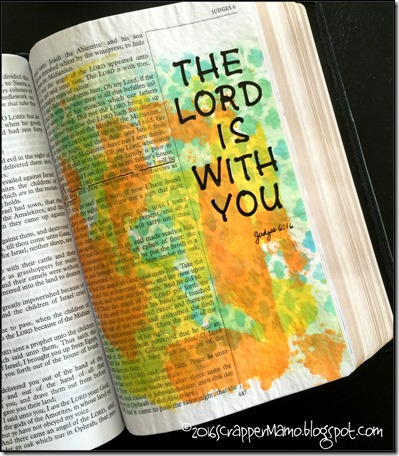 Lesson 4 of Rebekah Jones’ 2016 Bible Art Journaling Challenge (Heaven is Calling): The Lord is With You. The Bible passage focuses on the story of Gideon. I love the story. Gideon was honest with God when he was called out to serve in a special way. Gideon did not feel worthy and in fact couldn’t see himself as “having what it took” to accomplish the task. God was patient with Gideon, but He reminded Gideon more than once: “The Lord is with you.” God even called Gideon a “mighty warrior.” Finally, Gideon followed God’s direction, and he was successful, just as God had promised.

Sometimes I am critical of Gideon, and as I read the story, I want to call him aside and say, “Do you know who you are talking to? How can you question that He will be with you. He shouldn’t have had to tell you more than once, and He was very patient with you as you ‘put out the fleece’ to test Him. If He says He will be with you, He will. Now stop doubting.”

Boom. That’s it right there. I am not that different from Gideon. I know in my heart that God will be with me, no matter what He asks me to do. And yet, in my head, doubt creeps in every single time. How dare I question my all-powerful God. Well, maybe I don’t question him as boldly as did Gideon. But I AM questioning if I am fearful and have any doubt that HE WILL BE WITH ME.

I should learn from the Old Testament story of Gideon.

11 The angel of the Lord came and sat down under the oak in Ophrahthat belonged to Joash the Abiezrite, where his son Gideon was threshing wheat in a winepress to keep it from the Midianites.

12 When the angel of the Lord appeared to Gideon, he said, “The Lord is with you, mighty warrior.”

13 “Pardon me, my lord,” Gideon replied, “but if the Lord is with us, why has all this happened to us? Where are all his wonders that our ancestors told us about when they said, ‘Did not the Lord bring us up out of Egypt?’ But now the Lord has abandoned us and given us into the hand of Midian.”

14 The Lord turned to him and said, “Go in the strength you have and save Israel out of Midian’s hand. Am I not sending you?”

15 “Pardon me, my lord,” Gideon replied, “but how can I save Israel? My clan is the weakest in Manasseh, and I am the least in my family.”

16 The Lord answered, “I will be with you, and you will strike down all the Midianites, leaving none alive.”

28 Thus Midian was subdued before the Israelites and did not raise its head again. During Gideon’s lifetime, the land had peace forty years. 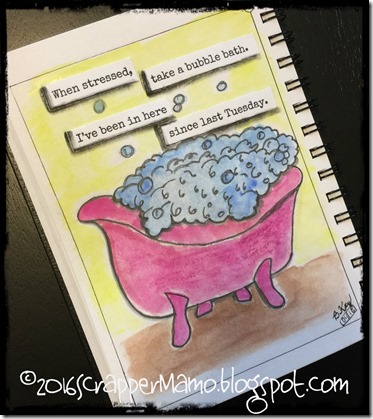 This week’s prompt (#15) is: “Sketch, quote, or illustrate your thankfulness for the ability to treat yourself with care.”

When I think of pampering myself, I envision a bubble bath. Simple as that. Not only is it relaxing, but it sometimes is the only thing that gives me any relief from my chronic muscle and joint pain. So, bring on the bubbles! 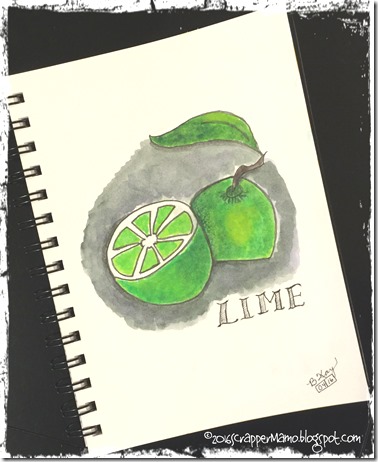 Prompt #14 for my 2016 Gratitude52 Art Journal (have there already been 14 weeks in this year?? Wow!) is “Sketch, quote or illustrate your thankfulness for fresh food.”

I love fresh food, and there is something about the season of Spring that makes me even more desirous and appreciative of FRESH food. Fresh fruits and vegetables are always appetizing, and I do love fresh lime!

Again, this is one of those gratitude prompts that makes me realize how much I take some blessings for granted—simple blessings for me; but I should stop more often to realize that some basic things that I take for granted—like shelter, water, food…are not so readily available to everyone.

We just returned from a very brief getaway with our son and daughter-in-law. We were only gone 2-3 days, and one of the things we enjoyed on our trip (about 3 hours from Ridgefield, WA, to Sisters, OR) was lots of wonderful food (oh, and lots of coffee as well—the Sisters Coffee Company roasts and grinds THE BEST)!!

So, this week’s prompt “food on the table” certainly was in keeping with our enjoyable mini-vacation.

(Note: Eating was not our only activity! Just posting these particular photos because they fit with this week’s Gratitude52 prompt!) 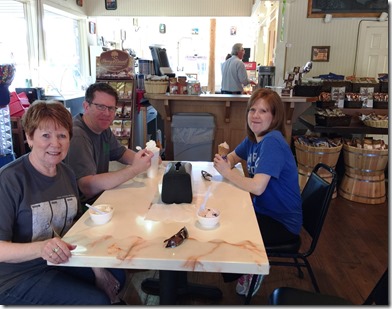 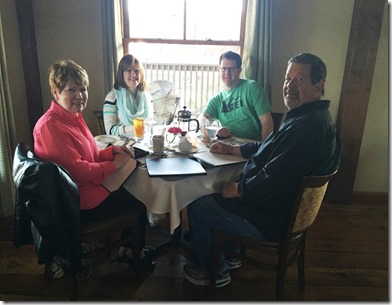 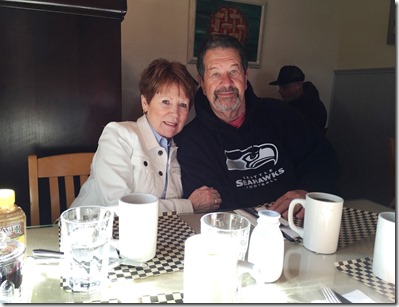 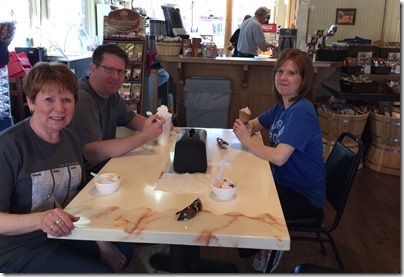 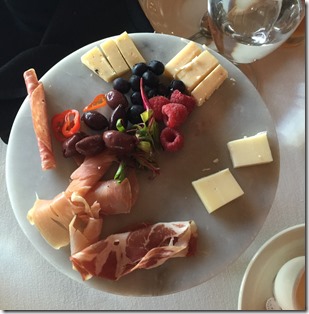 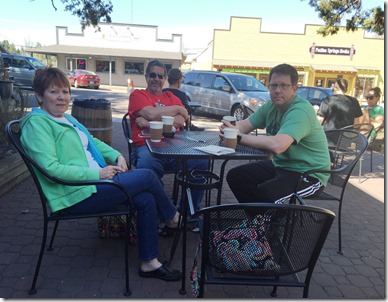 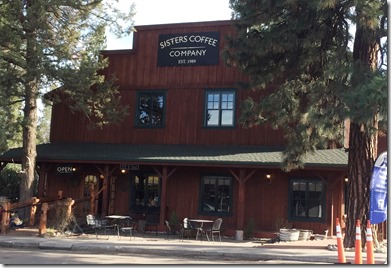 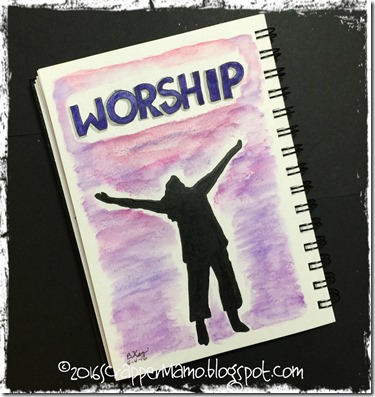 The desire and the ability to worship the God of the Universe (and my personal Lord and Savior)—AND the right to do so (so far, as of today) is a gift. I’m thankful for that gift.

Our Help is in His Name {Bible Art} 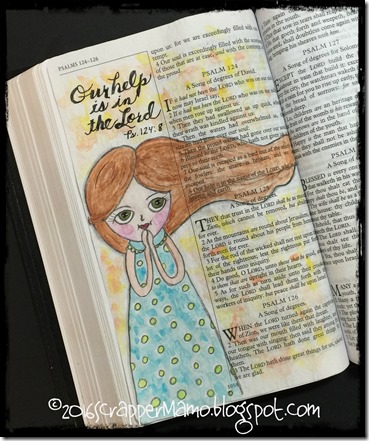 "Our help is in the name of Lord, who made heaven and earth."

Why do we keep forgetting?