In addition to the usual things that make Sunday special, today was just a nice day.
I got to spend it with my Honey. Well, yes, of course I get to spend almost every day with my Honey, but having been married almost 54 years, I don’t want to take our time together for granted. He is a blessing.
Another thing that made today special was a phone call from an old friend (from my IBM days) with whom I had lost contact. I think of her often but had not been successful in my attempts to locate her/reconnect. An unexpected phone message from her resulted in a long conversation, and it was so great to catch up. REAL-life friendships are so important (and another thing I don’t want to take for granted).
Of less importance, I did finish my Eastern Bluebird (state bird of Missouri) watercolor piece. This one was a challenge, because I am only just now brave enough to try painting a piece from a reference photo (with no tutorial or teaching helps along the way). I think this is my second one. When I try something like this, that’s when I see how much I still have to learn. How in the world DO I make my painting look like the photo?! (My favorite app for copyright free photos is Pixabay.) 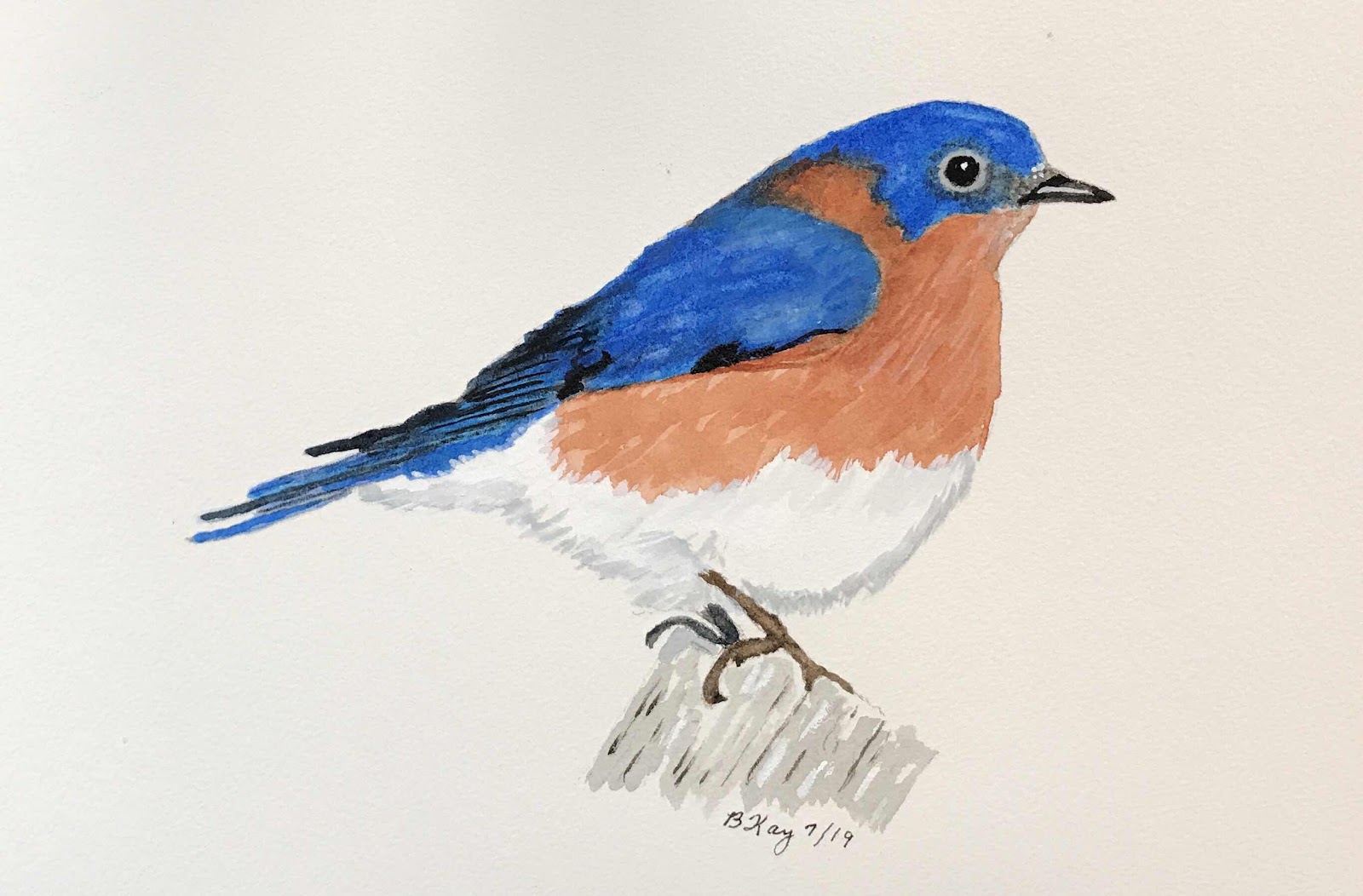 Yes, I am blessed, and I am grateful.
#worldwatercolormonth #easternbluebird #watercolorpractice #friendships #54years
Posted by Barbara at 7/07/2019 07:08:00 PM 1 comment: 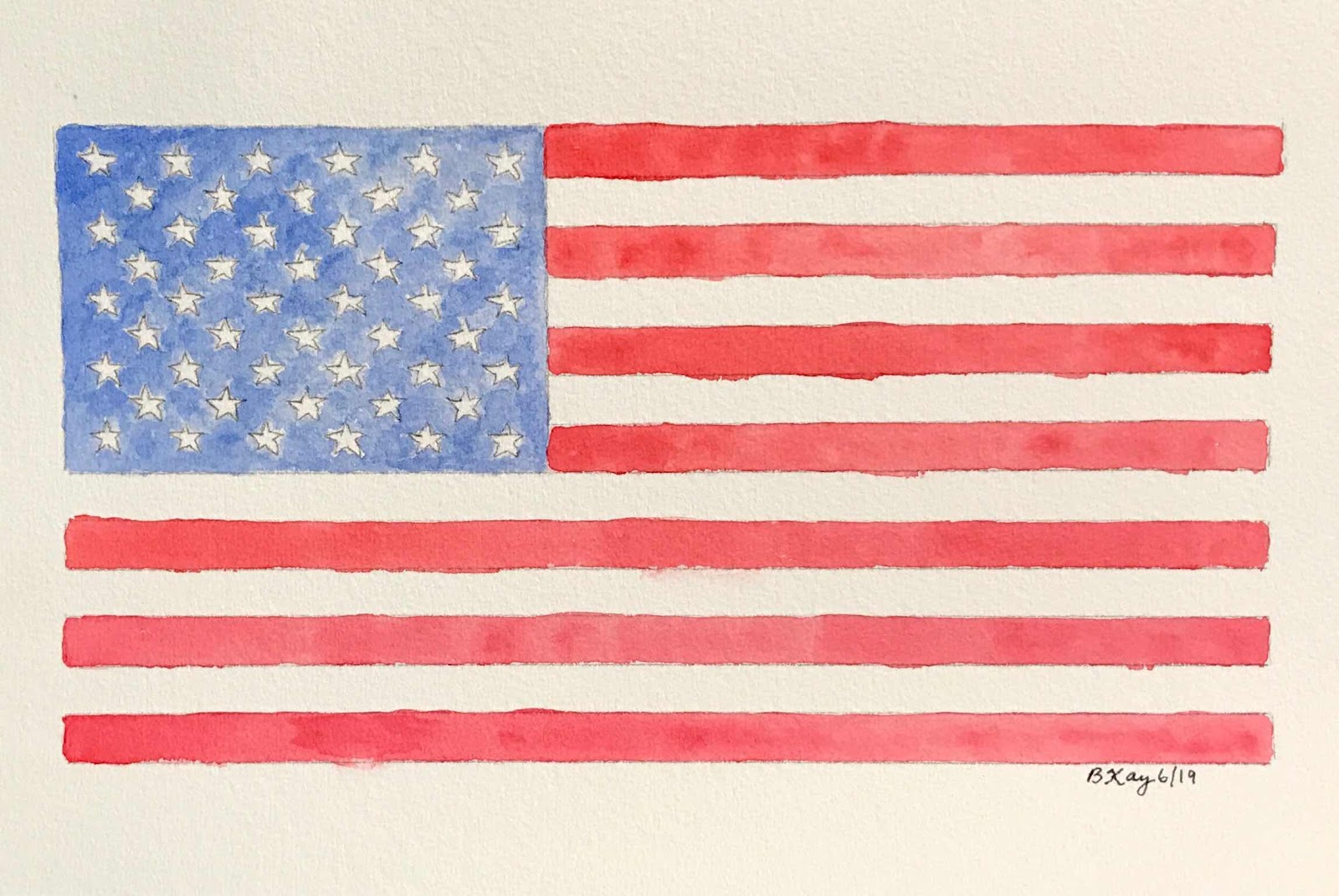 Although we would prefer to spend ALL holidays with our family, that’s just not possible. But, Hubby and I did enjoy a laid-back celebration of the birthday of our beloved country. We do love patriotic holidays, and we always shed some tears as we read Facebook posts with a military or veteran or patriotic theme. (My husband served as an officer in the USMC, including a tour of duty in Vietnam, and is particularly sentimental when it comes to the flag!)
Our daytime activity was mainly watching baseball, a win for the Cardinals (our favorite/only team). A snack of homemade sundaes (vanilla ice cream topped with hot caramel sauce and toasted pecan halves) was enjoyed “(because it is a holiday,” we said to each other).
In other years, with family, we might have had watermelon, but not this year. Still, it is a snack I often associate with July 4, and I especially think of my dad and brother—both crazy about watermelon, especially big ol’ Black Diamond melons! I thought of those two as I painted this quick and casual watercolor piece. 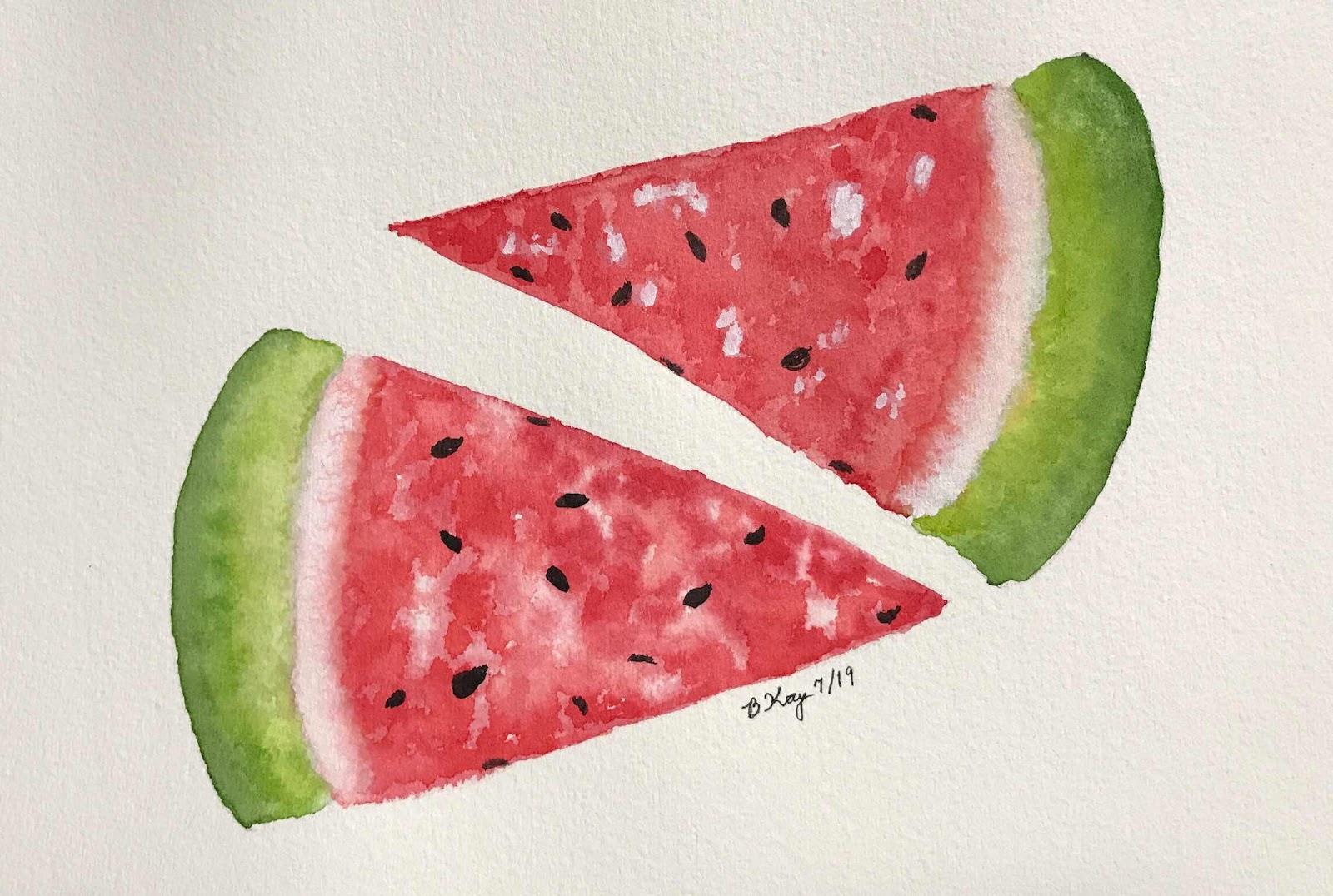 That evening, with no baseball to watch, we did the unusual for us and watched a DVD movie, “Independence Day,” one of my favorites. Don’t ask me why it’s a favorite. Well, it IS a combination of extreme patriotism and the mystery of UFO’s, always of interest to me. I know...don’t judge me.
My watercolor pieces lately have been casual and light-hearted (fun). 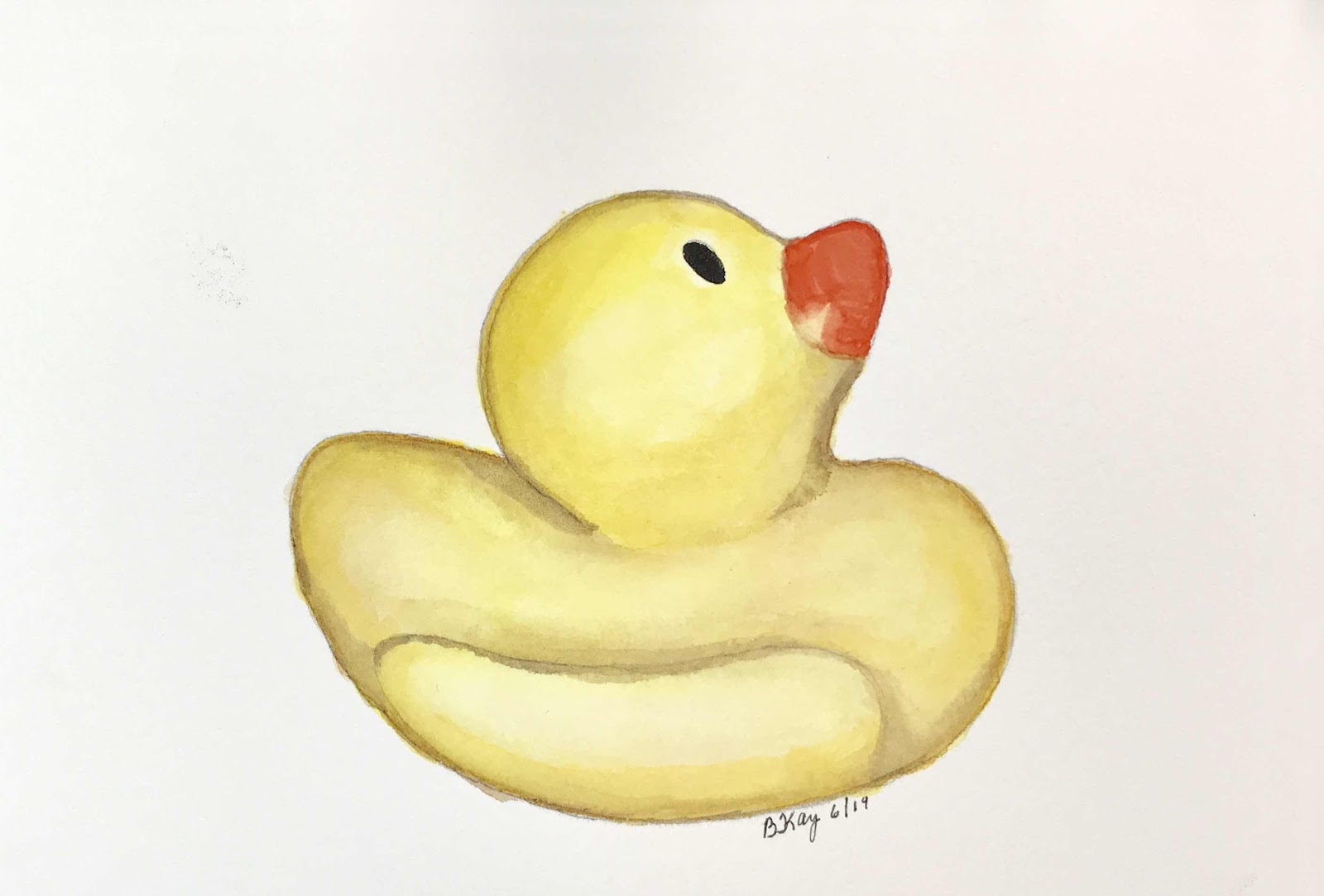 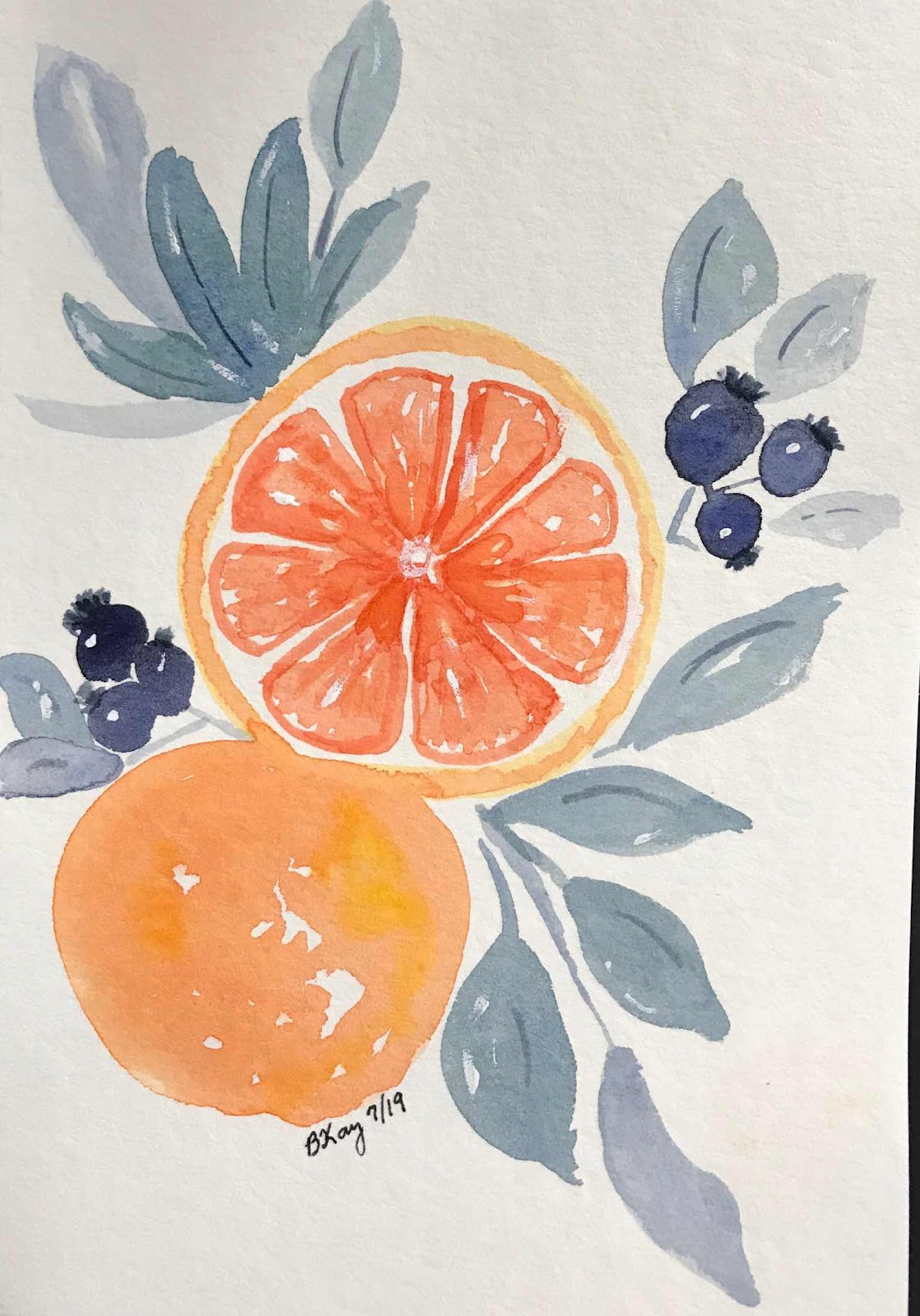 Today, though, I’m working on a Bluebird, painting from a reference photo. Difficult for me. Not done yet.
#worldwatercolormonth #IndependenceDay # USFlag #patriotism #watermelon #mariaraczynska #letsmakeart
Posted by Barbara at 7/06/2019 02:46:00 PM 1 comment:

Long Trek Back, Back to the Halcyon Days {Sentimental Journey}

It fell to my brother and me to go through many of the keepsakes that our mother left behind. Daddy passed away in 1988, and it has been six years since Mother passed. The last large box of her things has been stored at my house, and we decided it was time to do our due diligence.

On two different occasions within the last couple of weeks, my brother has made the five-hour round trip to my house, and we have risen to the challenge (that’s what we do). 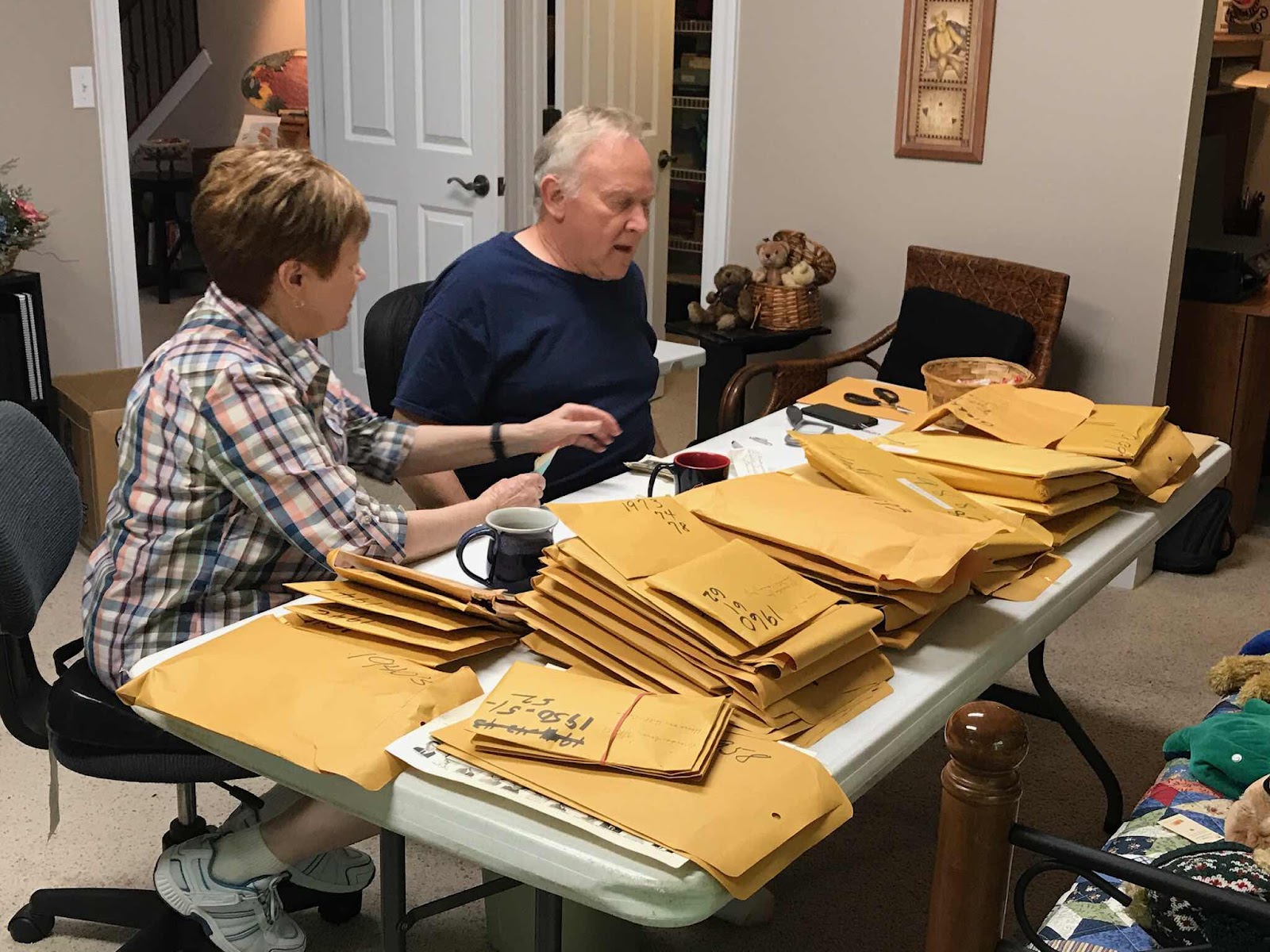 There were 60-70 manila envelopes, all organized by year, thankfully. We simply would not have been able to accomplish what we did if Mother had not divided and labeled everything like she did.

In the end, we spent more than 14 hours of solid work (and fun!). Breaks for meals and snacks — oh, and always coffee—kept us going. But by the time we finished, we were tired—and seeing old photos and mimeographed programs when we closed our eyes!! 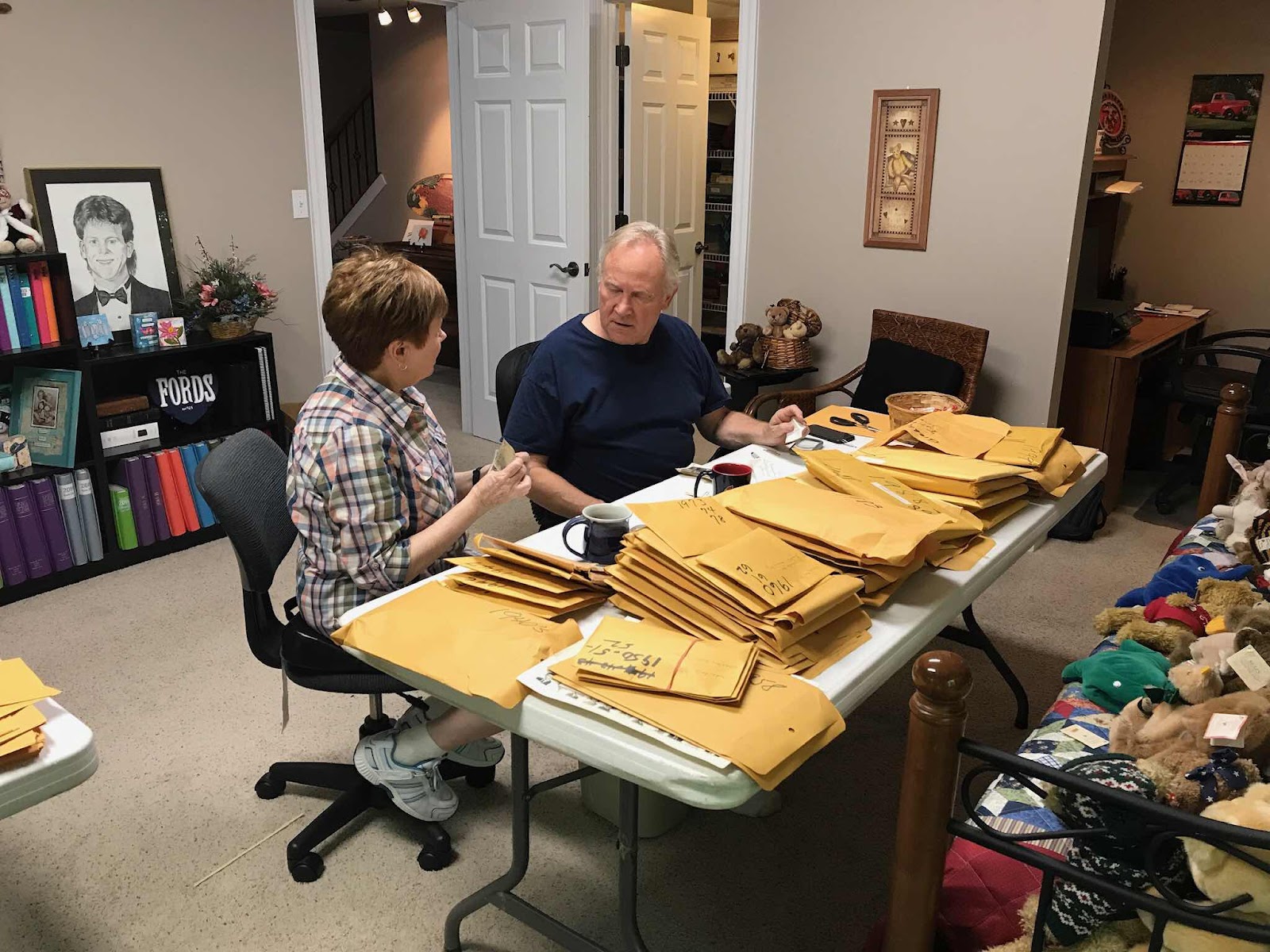 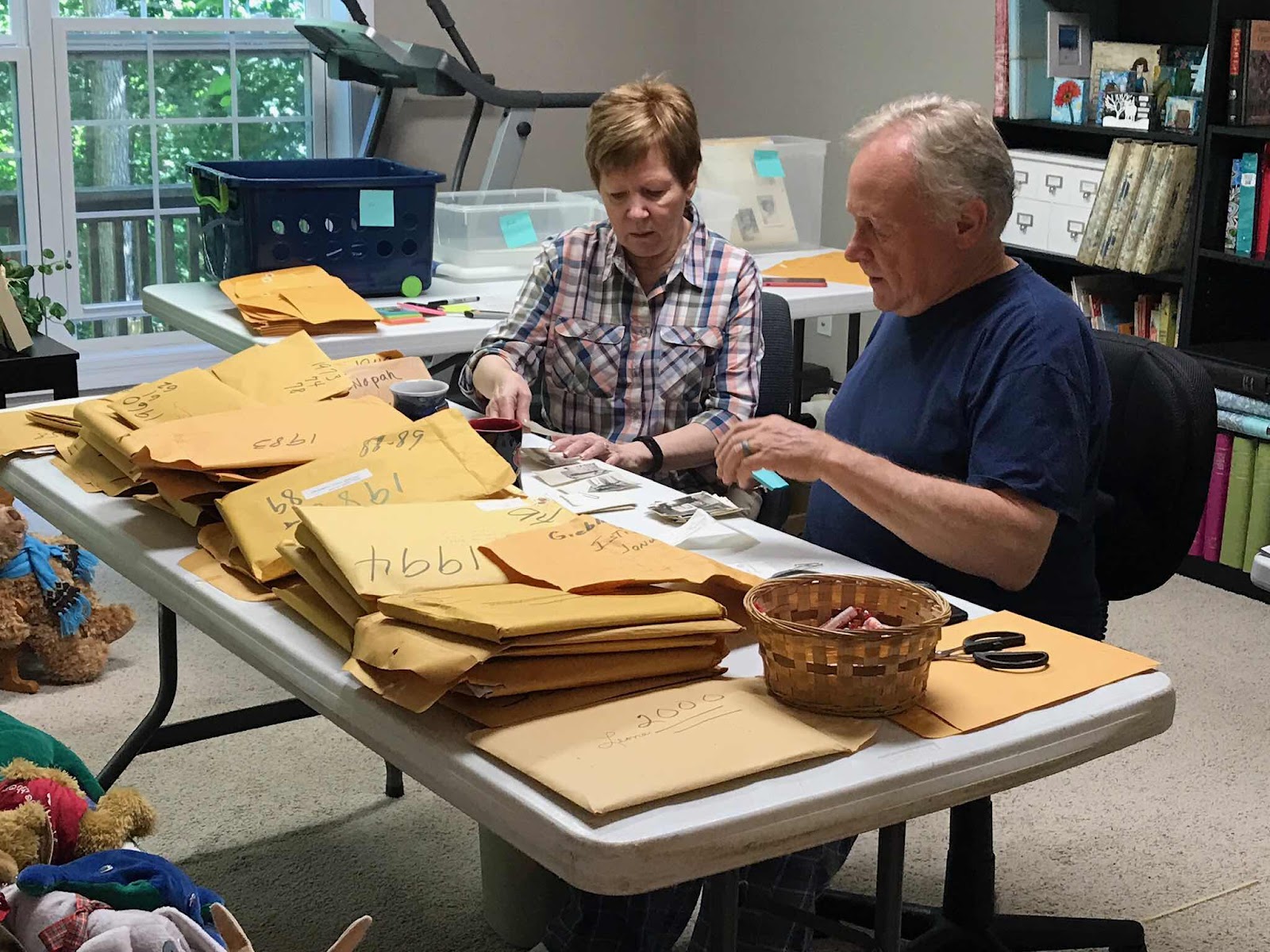 My brother was particularly interested in the envelopes that contained keepsakes and photos from Daddy’s time in France and Germany (USArmy Air Corps) during World War II. 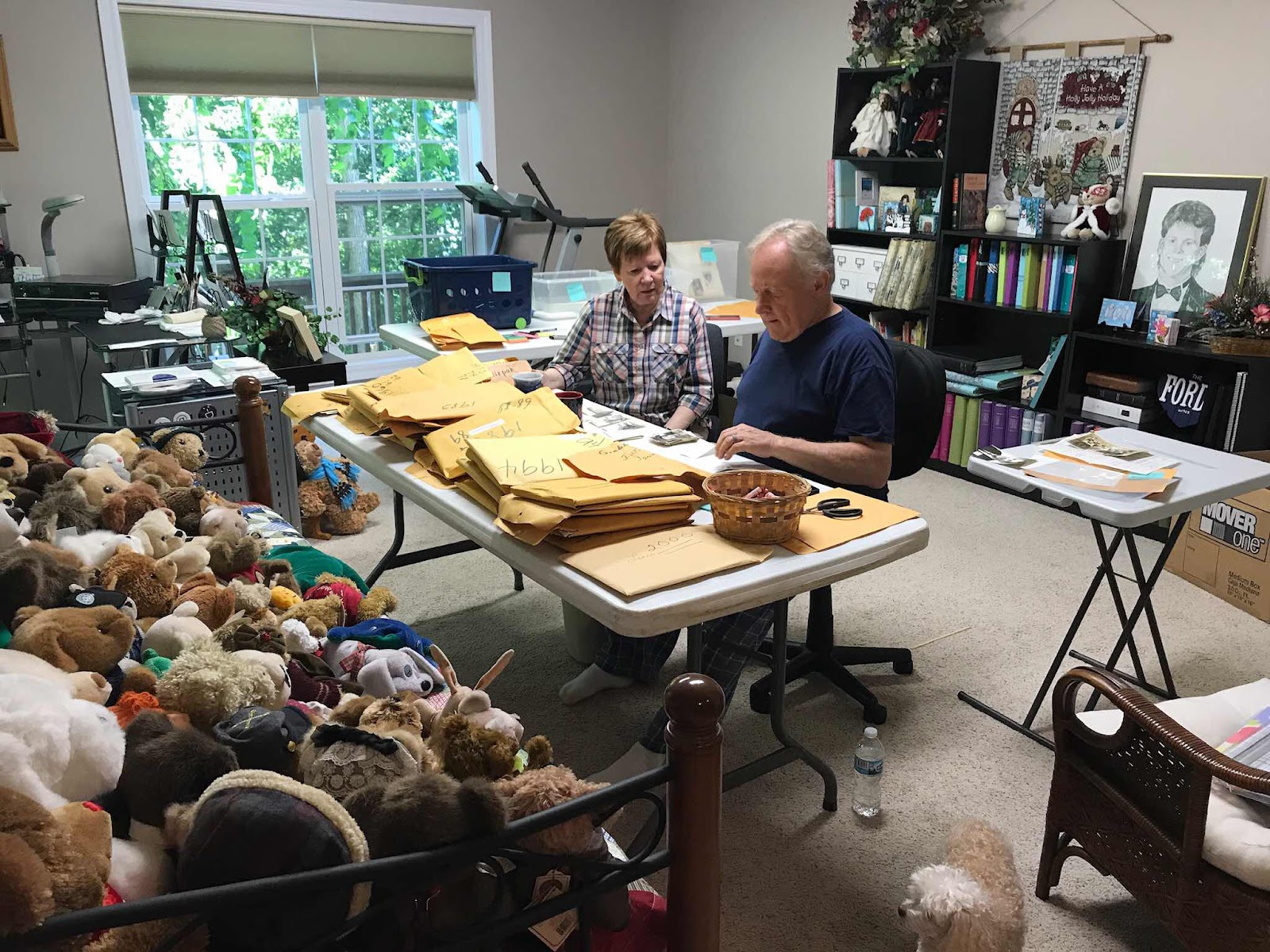 It seemed daunting at first. We had thought we could accomplish our goal in one afternoon/evening, but after those first 7 or 8 hours, it became clear that a second attack would be required.

We separated out keepsakes for all our siblings and ourselves—my Hobby Room became a veritable heap of manila envelopes!

So many newspaper articles of their children and grandchildren winning awards and scholarships and accolades (we talked about how we just took it for granted, all the successes in our family, due in large part to our parents’ encouragement and guidance). So many letters from people in their churches that Daddy pastored, and from the professional world (Daddy was also a teacher and Director of Teacher Certification for the Missouri Department of Education)! So many greeting cards and church program bulletins. So many years’ worth of memories.

We made several interesting and fun discoveries. In addition to the envelopes, there were a couple of very old photo albums. These nice 8x10 studio pictures of our parents’ senior pictures and their wedding picture were amazing (also some studio pictures of Daddy in military uniform). 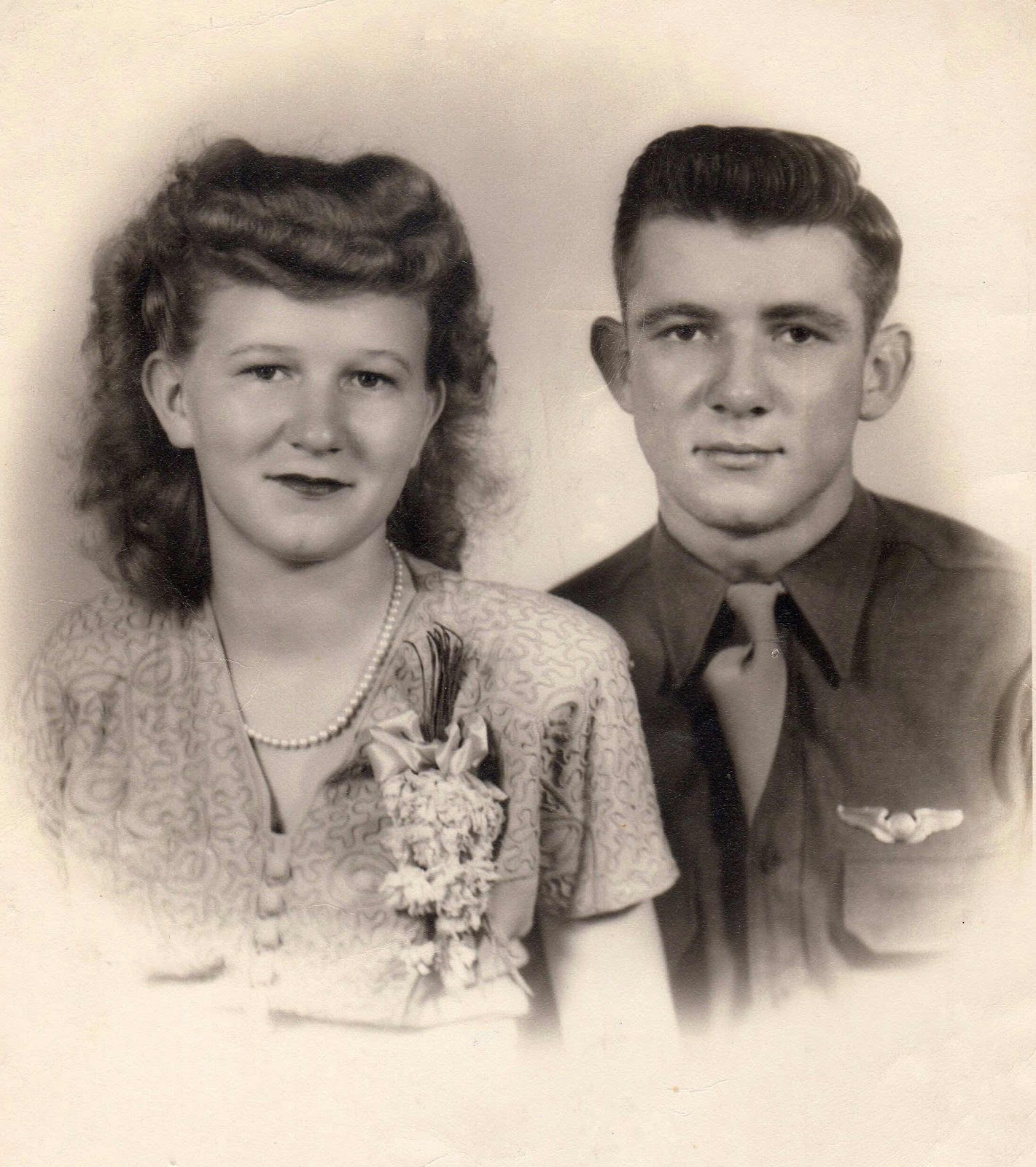 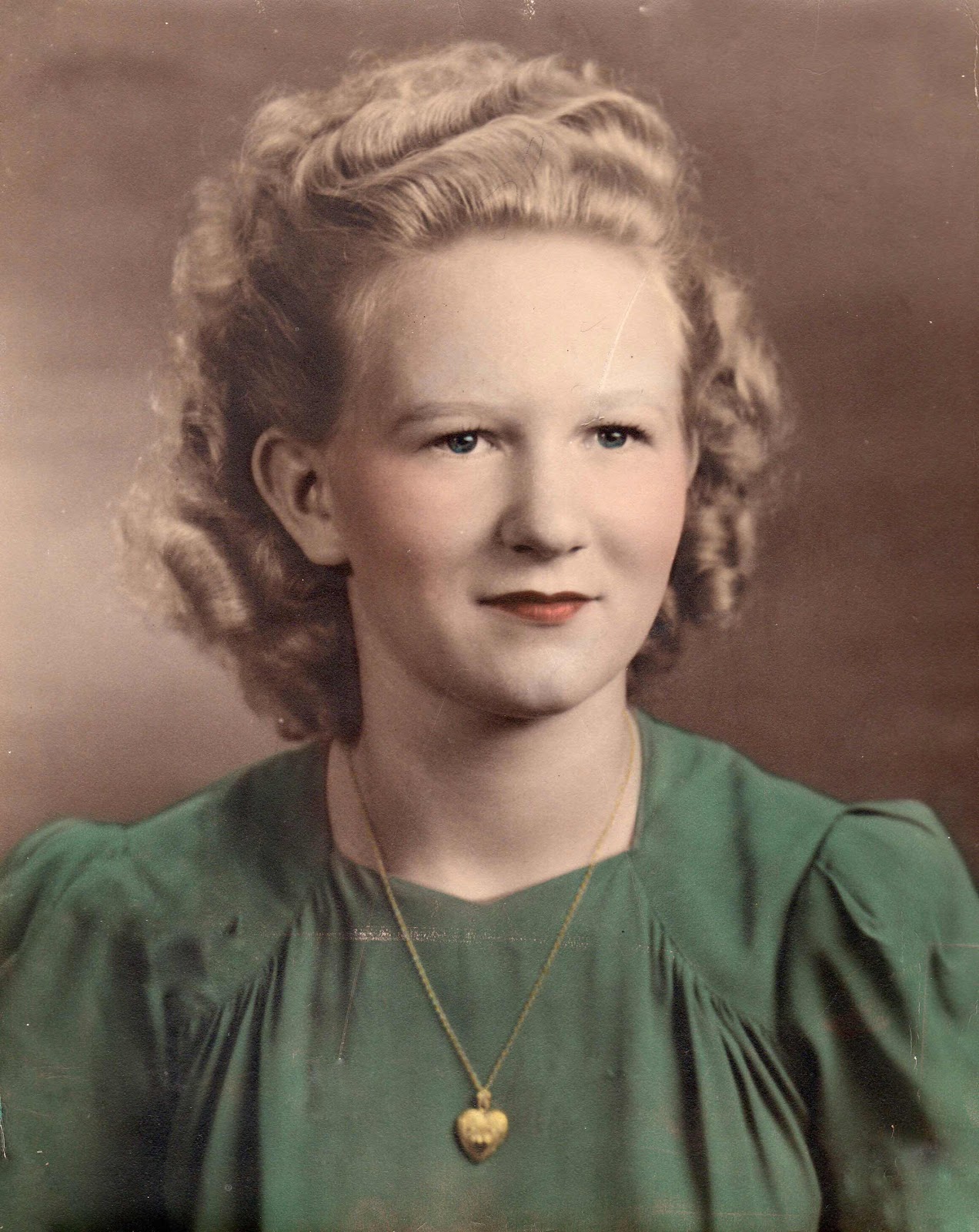 Leona Cox (we saw a photo that had this 8x10, in a frame, sitting on Daddy’s footlocker while he was in military training in Florida, before their marriage.)
1945 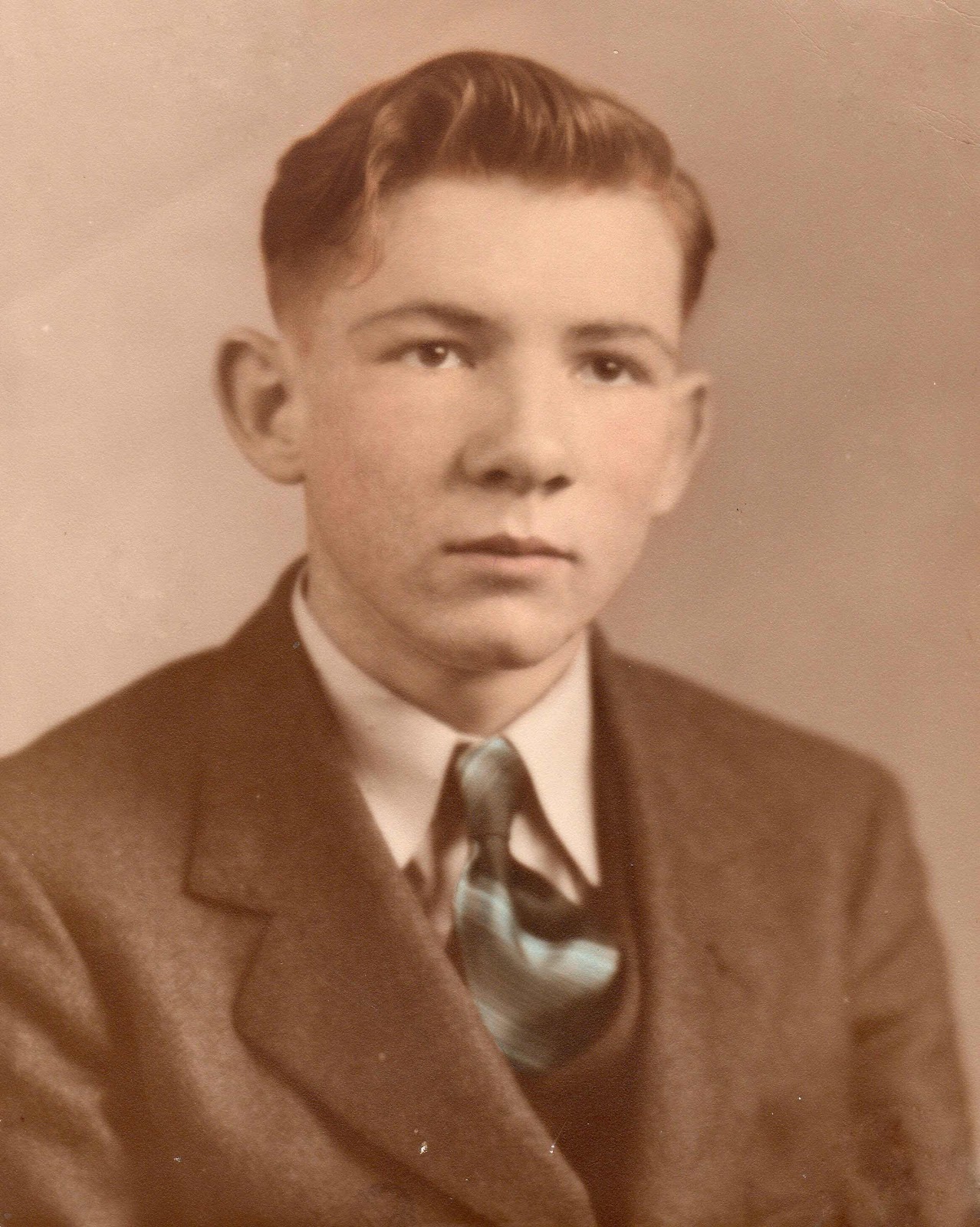 I framed these to add to my bookshelf where I already had some family and  heritage photos. 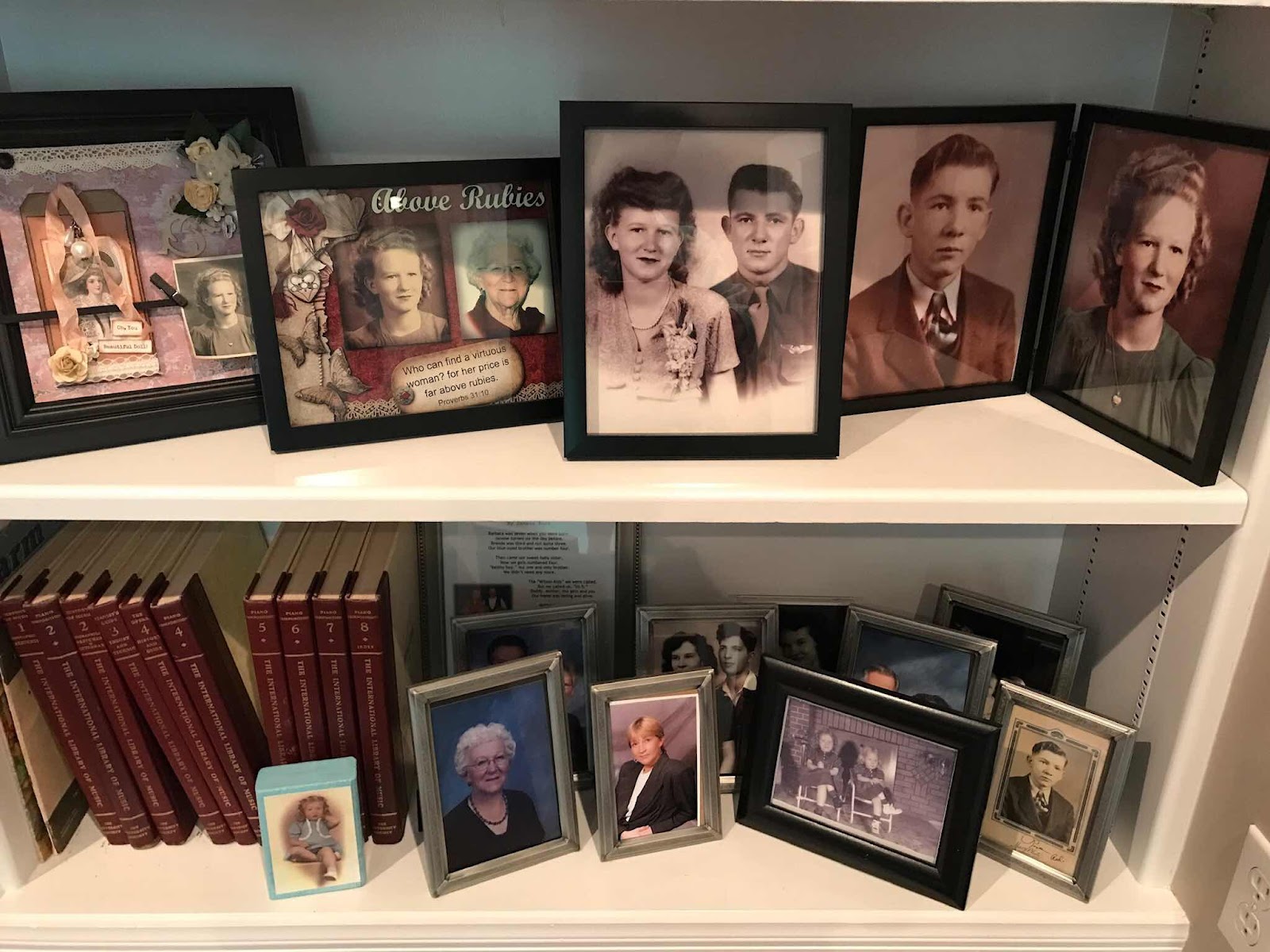