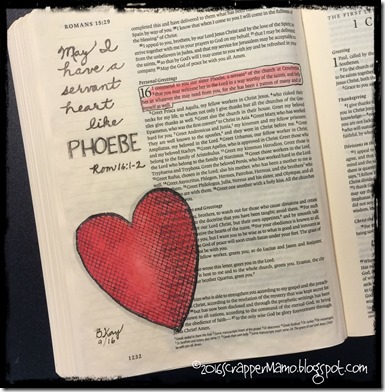 Thoughts shared from Sara, leader of the Women of Valor Bible Study:

Phoebe is only mentioned in a single sentence, in the Book of Romans. But through that sentence, we receive hints of a life dedicated to the church and its people, and we are inspired by an example of generosity and dedication.

I commend to you our sister Phoebe, a servant of the church at Cenchreae, that you may welcome her in the Lord in a way worthy of the saints, and help her in whatever she may need from you, for she has been a patron of many and of myself as well.  (Romans 16:1-2)

We know from Paul’s description of her and from her willingness to make the journey to Rome, that Phoebe was deeply devoted to the work of the church. For a woman, this was quite an honor and a rarity at that time.

We can also tell from Paul’s description of Phoebe that he feels deeply grateful to her for the work that she has done. He calls for the Romans to treat her “in a way worthy of the saints” and “help her in whatever way she may need” because she has been a patron for many, including Paul himself. Phoebe’s generosity, then, is both in terms of her time and her gifts. Phoebe was likely born into wealth and used her gifts to serve the church and maintain its servants. She also used her spiritual and earthy gifts — time, patience, and the freedom to travel — to serve the church in bringing Paul’s letter to the Romans.

Phoebe seems to have given both spiritual and earthly gifts, in a true example of generosity. Her example of service allows us to look at our own lives, seeing where our own qualities may be being used to help others or contribute to the church.

For me personally, I want to always be willing to use my gifts to serve the church and God’s kingdom. Circumstances do not always allow me to actively use my gifts, but my part is to be willing and to look for opportunities. 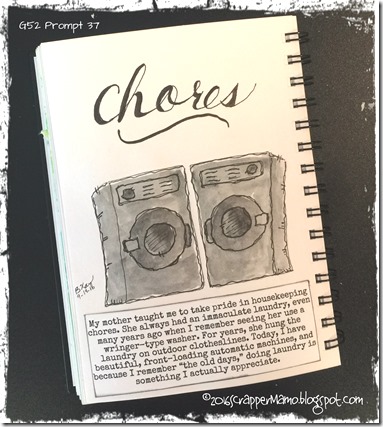 Prompt #37 for the Gratitude52 Art Journal Challenge is to illustrate gratitude for chores. As Jenny shared in this quote from an unknown author:

"Thank God for dirty dishes,
they have a tale to tell;
while others may go hungry,
we’re eating very well."

For me, I have honestly never minded doing housework chores. I think part of that is because I always felt like being a “homemaker” was part of my calling. My mother taught me an appreciation for a well-kept house and immaculate laundry. I admit I did not like to do laundry when I was first married and had to go to the laundromat. I remember when I got my first automatic washer and dryer. I went through the house gathering up anything I could to make a load so that I could do the washing. Loved it.

Sometimes I think I appreciate things more than some of the younger generation, because I know what it was like to (as my mother would say) “do without.” 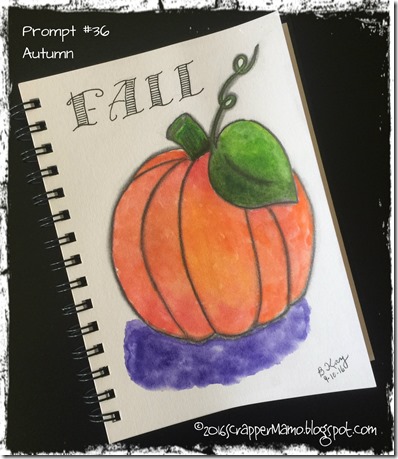 We will soon be headed back across the country, from our WA home to our MO home, and I am looking forward to autumn in our home state, where the colors in our woods during the fall are just beautiful.

This week’s prompt for the Gratitude 52 Journal is “illustrate your appreciation for autumn.” Here’s a quick sketch and paint (watercolor) to answer the challenge. 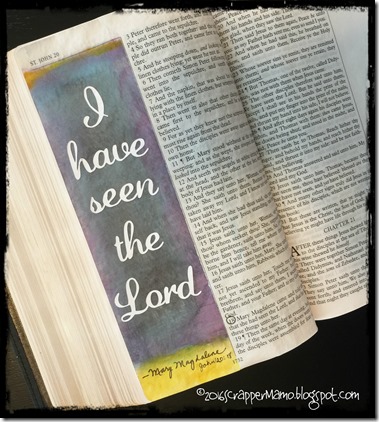 “Seasons Illustrated” blogger “Sara Laughed” presented an excellent discussion of this Woman of Valor. Here are some of her words that helped me have a new appreciation for Mary Magdalene:

We don’t know very much about Mary Magdalene first-hand. Instead, we hear a few facts about her life in retrospective and are left to fill in the blanks. The first we hear of her is in Luke 8:1, when Jesus is traveling through the cities and villages, “proclaiming and bringing the good news of the kingdom of God” (Luke 8:1). With him are the disciples and “some women who had been healed of evil spirits and infirmities,” including “Mary, called Magdalene, from whom seven demons had gone out” (Luke 8:2).  What we know of Mary’s past, then, is that she was a woman who struggled with illness and evil until she encountered Jesus, and that after he healed her, she spent her life following him.

The next we hear of Mary Magdalene is at the time of the death of Jesus in Mark 15. Jesus has been convicted, mocked and belittled, and crucified. At the time of his last breath, the centurion watching the crucifixion says, “Truly this man was the Son of God!” (Mark 15:39). We read that the women watch from afar, Mary Magdalene among them. The pain and anguish that these women must have felt is unbelievable. They likely believed that this was the ‘end’ of the story; but as we know, it is only the beginning.

After Jesus is wrapped in linen and brought to the tomb, Mary Magdalene and another Mary see where Jesus was laid and sit opposite the tomb (Mark 15:47, Matthew 27:61). The following morning, they go to the tomb to anoint him with spices when they find the tomb empty (Matthew 28:1, Mark 16:1, John 20:1). When they see the stone was rolled away, Mary runs to Simon Peter and “the other disciple” and cries, “They have taken the Lord out of the tomb, and we do not know where they have laid him.” (John 20:2). The disciples, not understanding that Jesus would rise again, returned to their homes; but Mary stayed, weeping, and Jesus appeared to her (John 20:8-14):

Jesus said to her, “Woman, why are you weeping? Whom are you seeking?” Supposing him to be the gardener, she said to him, “Sir, if you have carried him away, tell me where you have laid him, and I will take him away.” Jesus said to her, “Mary.” She turned and said to him in Aramaic, “Rabboni!” (which means Teacher). Jesus said to her, “Do not cling to me, for I have not yet ascended to the Father; but go to my brothers and say to them, ‘I am ascending to my Father and your Father, to my God and your God.’” (John 20:15-17)

Mary listened, running to the disciples. And she told them, “I have seen the Lord,” and repeated his words to her.

Though there were several women who followed Jesus and participated in his ministry, Mary Magdalene is the best-known, likely because she was the first named and the first person to whom Jesus appeared after the Resurrection. Like Mary of Nazareth and Elizabeth, who we have studied in previous weeks, Mary Magdalene recognized the divinity of Jesus. Unlike those two women, she came from a place of immense darkness, and then devoted her life to following Jesus, literally walking beside him as he journeyed from city to city. How is Mary Magdalene’s story a metaphor for our own journeys with God? 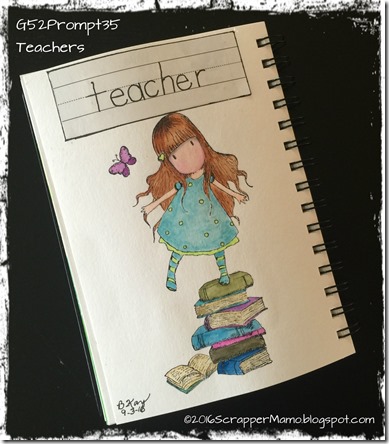 The prompt for Week 35 of the Gratitude52 Art Journal Challenge is to illustrate our appreciation for teachers.

“Back to School” is in my blood. Where are those school supplies? Well, I do have them. These days they are in the form of paints and colored pencils and coloring books and planners and sketchbooks.

Being a teacher makes me able to fully appreciate and be thankful for teachers. I am grateful for my teachers through the years, as well as for the teachers of my children and my grandchildren. Being an excellent teacher is a special gift. 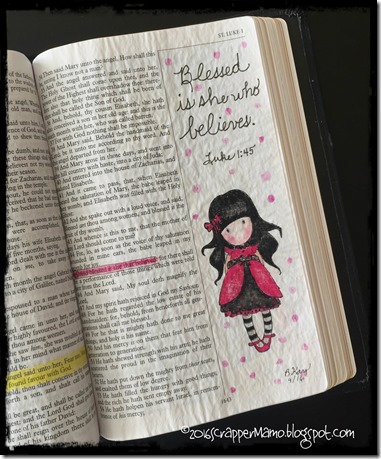 For the study on Elizabeth, I chose to illustrate the Bible verse with a stamp from a new collection I love—a Santoro’s Gorjuss stamp. I colored the stamped image with PrismaColor Premier Colored Pencils.

I love the story of Elizabeth, especially the part where she is blessed to be one of the first to know, and believe, that her cousin Mary is carrying the Messiah. In fact, it was because of her belief that she was blessed. Message for us as well! 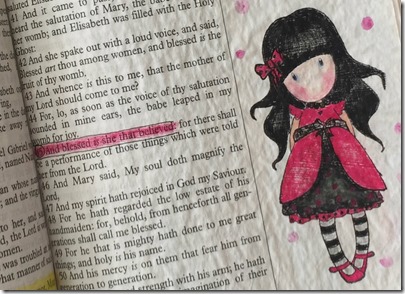