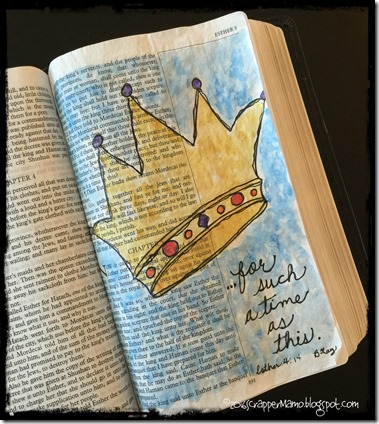 The “Heaven is Calling” series of Bible Journaling Studies focuses on “connecting with a good God.” Lesson 8 is from the book of Esther.

13 Then Mordecai told them to reply to Esther, “Do not think to yourself that in the king’s palace you will escape any more than all the other Jews. 14 For if you keep silent at this time, relief and deliverance will rise for the Jews from another place, but you and your father’s house will perish. And who knows whether you have not come to the kingdom for such a time as this?” 15 Then Esther told them to reply to Mordecai, 16 “Go, gather all the Jews to be found in Susa, and hold a fast on my behalf, and do not eat or drink for three days, night or day. I and my young women will also fast as you do. Then I will go to the king, though it is against the law, and if I perish, I perish.”

Esther set aside her own desire to live, in order that she could potentially save her own people, the Jews.  She was where she was, when she was there, for the express purpose of saving her people. In taking the actions she did, she even risked her own life. It was a brave thing for her to do.

The phrase “for such a time as this” is one that has come to my mind many times. For Christ-followers who strive to be used for God’s purposes, I believe we often find ourselves at “just the right place, at just the right time.” And if we have that feeling, that we have come to a certain place, at a certain time, for a certain purpose, we should be willing to follow through on God’s plan, even if it means taking a personal risk. That’s how God used Esther for His plan, and that is how He can use us.

I do love popping in and seeing your Bible journaling....though it's been a while. You have such fun, inspiring pages. :) Thanks for sharing!

I'm so happy you enjoy popping in!! I really appreciate your encouragement, and pop in anytime!!