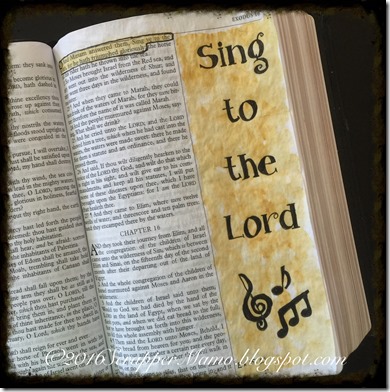 I typically remember Miriam as the sister-protector who watched over her baby brother Moses, after he was placed in the bulrushes by his mother, to escape death from Pharaoh’s decree to kill all the Hebrew baby boys. She was brave and bold in her desire to protect her brother, and she played a major role in her brother’s eventual rise as the leader of the Israelites.

After that brother grew up and led the Hebrew people out of bondage in Egypt, once again we see Miriam, this time as a worship leader.

Then Miriam the prophetess, the sister of Aaron [brother of Moses] took a tambourine in her hand, and all the women went out after her with tambourines and dancing. And Miriam sang to them: “Sing to the Lord, for he has triumphed gloriously; the horse and his rider he has thrown into the sea.”
-Exodus 15:20-21

There is more to Miriam’s story, but for this Bible art, I focused on “Sing to the Lord.” This instruction still applies today. We should be about “singing to the Lord,” in the good times but also in the bad times. In the good times, we rejoice because He has “triumphed gloriously.” In the bad times, we rejoice because we already know He is GOING TO “triumph gloriously” over our enemies.

This Woman of Valor is referred to as one of those whom God sent to lead the Israelites out of slavery:

I brought you up out of Egypt
and redeemed you from the land of slavery. I sent Moses to lead you, also Aaron and Miriam.
-Micah 6:4

Thank you for this reminder . In Christ, we are never without cause for a song.