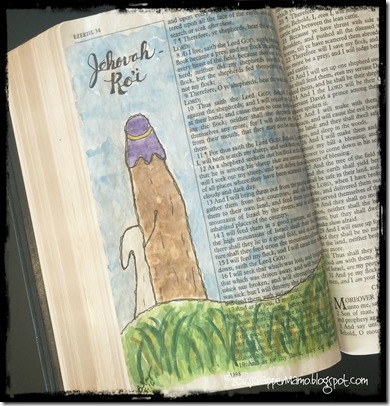 Studying the Names of God (not an in-depth study, which I would like to do sometime), I love them all. But thinking of God as the Shepherd of His People is a comforting thought. The picture that comes to my mind brings a smile and a feeling of peaceful assurance.

One of my references had this information:

The Hebrew word "rohi" (or "ro'i" or "ro'eh") is both a noun and a verb, meaning "a shepherd" and "a pasture", as well as "to shepherd" or "to pasture". An extended translation of the word as a noun is also "friend" or "companion". This indicates the intimacy YHWH desires between Himself and His people. He doesn't want mentally- and emotionally-detached children simply going through repetitious religious exercises. He wants a close personal involvement in every aspect of our lives, one in which we would come to truly depend on Him for our every need.

The word "rohi" alone first appears in Genesis 37:2: "...Joseph . . . was feeding the flock [rohi] with his brothers..." A more direct reference to the role of shepherding appears in Genesis 47:3-4 when Joseph's brothers told Pharaoh, "...Your servants are shepherds [rohi], both we, and our fathers . . . We have come to live as foreigners in the land, for there is no pasture [rohi] for your servants' flocks..."

On this page I quickly sketched the image and then painted with InkTense Blocks.