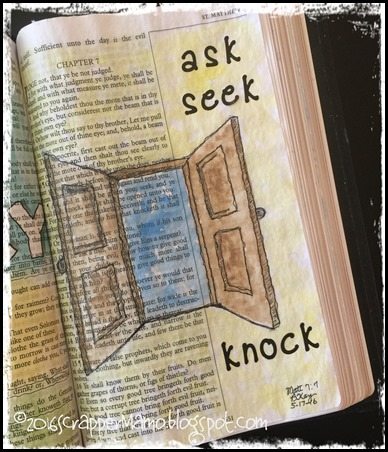 Guest blogger today: My son, Pastor Mark Ford. His blog, Thoughts to Think Through, is always thought-provoking and inspiring. Yesterday’s post, “The Most Important Prayer,” prompted my Bible art today. With his permission, I am printing his piece in its entirety, as this was on my heart as I sketched and painted the illustration for Matthew 7:7.

The Most Important Prayer

Thy will be done.

Those four words comprise the most important sentence you could ever pray.

Jesus told us to ask, seek and knock, and to expect God to give us what we ask for (Matthew 7:7-11). This principle is seen throughout Scripture. James also indicated that we do not receive, because we do not ask in faith. We are clearly instructed to seek what we desire from God. We are to ask and keep on asking. Jesus even told a parable to illustrate that begging God repeatedly for something is the best way to get it. Sometimes God absolutely WAITS to give us what we are asking for until we ask and keep on fervently asking for an extended period of time.

Preachers of the “Prosperity Gospel,” though heretical, are nonetheless correct in teaching the above half of the equation. Part of their error comes in not including the following warning: Sometimes, when God gives you what you asked for, it is not a good thing. Oh, it is absolutely true that God wants to give you what you want. He doesn’t like saying no to His kids. In fact, God hates saying no so much, that sometimes He says yes even when He knows you are going to be wishing you hadn’t asked in the end.

When Jesus taught us to pray, He included the all-important sentence I mentioned above, “Thy will be done.” He also demonstrated this for us from the Garden, where, sweating drops of blood, He prayed, “Nevertheless, Thy will be done, not mine.” Jesus fervently and repeatedly asked for the cup of suffering to pass from Him, but not without including just as fervently, “Thy will be done.”

When it comes to prayer, there is no way to overemphasize the importance of those four words.

Ask the Israelites. When they wanted a king, they forgot to add these words. When they wanted meat in the wilderness, they forgot to add these words. Both times, God gave them EXACTLY what they asked for. In the first instance, they received their king, and it led to war and ultimately destruction. In the second instance, they received so much meat that it caused a plague and many died. God said, “I’ll give you enough meat until it is running out of your noses” (Numbers 11). Both times, their prayers did not line up with the will of God. Both times, all they could think about was what they wanted, and receiving it, they faced the consequences of their own lack of foresight. They forgot to pray, “Thy will be done.”

Psalm 37:4 says, “Delight yourself in the Lord, and He will give you the desires of your heart.” Some would take this as a sure-fire way to get whatever you want from God, like an algebra equation guaranteeing results. Do A and get B. They fail, however, to understand that when A is true, B is automatically changed. When you delight yourself in the Lord, the desires of your heart become conformed to His will. Why? Because when He becomes your delight, His desires become yours.

As a child of God, perhaps the most dangerous thing you could ever do is to ask God for what you desire without adding, “Thy will be done.” God said in advance that He is prone to give His children what they want most (Matthew 7:11). If what you want most is not His will, beware the power of prayer!

Scripture absolutely encourages the children of God to ask for the desires of their hearts. Do not take what I have written to mean you should skip the asking part and simply pray a blanket prayer for the will of God. Not at all! Keep on asking, seeking and knocking. BEG GOD for the desires of your heart! Spend large amounts of time doing this! But don’t forget to add the most important words to your prayer: “Thy will be done.” And don’t be surprised when His will and your will are no longer two different things.

Father, let Your will be done, and let every ounce of my will become Yours.

What type of ink was used for the image

I sketched the image with Staedtler marker .02. The color on the image is InkTense blocks. I used a water brush applied to the block and then directly to the page. (The page was prepped first with TriArts Clear Gesso.) Let me know if this does not answer your question.