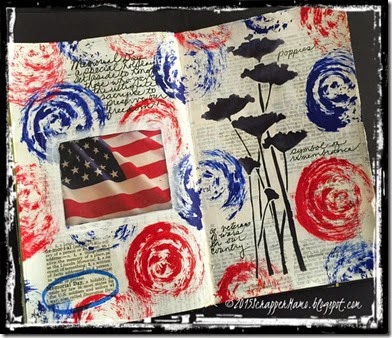 Today, one of my art journal challenges was to use a BRUSH, but not a paint brush. From the kitchen, I pulled out a vegetable brush. I dipped it in acrylic paint and used it to make the suggestion of flowers, or bunting, or whatever, in a layout about Memorial Day.  I incorporated a stencil (with archival ink) of poppies, the traditional flower for remembering veterans. 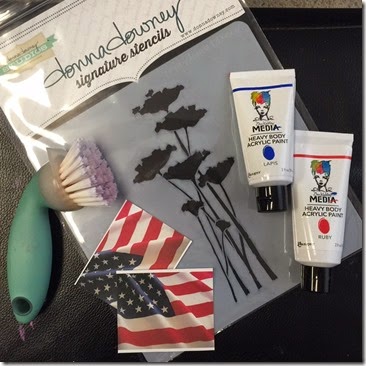 I’ve always been a bit confused about this holiday. Growing up, I was familiar with Decoration Day as the day to put flowers on family graves. I didn’t have a clear understanding about “Memorial Day,” as it relates to Decoration Day and veterans. So I looked it up on Google.

According to Wikipedia, “Memorial Day is a federal holiday in the United States for remembering the people who died while serving in the country's armed forces. The holiday, which is observed every year on the last Monday of May, originated as Decoration Day after the American Civil War in 1868, when the Grand Army of the Republic, an organization of Union veterans — established it as a time for the nation to decorate the graves of the war dead with flowers. By the 20th century, competing Union and Confederate holiday traditions, celebrated on different days, had merged, and Memorial Day eventually extended to honor all Americans who died while in the military service.”

Originally celebrated on the 30th of May, it is now observed in almost every state on the last Monday in May with Congressional passage of the National Holiday Act of 1971 (P.L. 90 – 363).

The Junior Dictionary I use for collage papers is a bit “vintage,” as it still defines Memorial Day as a May 30 holiday.

As an American, I appreciate a special day that encourages me to take a moment to be grateful to those who gave the ultimate sacrifice for my freedom.

This is eye opening. I had honestly thought it was just as much for anyone who had "gone before." And I guess it can be. But knowing the history is good. Thanks.

I guess I was not the only one with some confusion about the holiday. But, as far as taking flowers to cemeteries (the concept behind the "Decoration Day" that I knew about as I was growing up), in my world at least, it does mean decorating graves of all those who had "gone before," not just those who died in wars. But it is neat that at most cemeteries, there are flags on the graves of those who served in the military, on Memorial Day weekend.