“This Do in Remembrance” Then and Now

The date was June 28,1959. It was Daddy’s first Sunday as pastor of Pleasant Hill Baptist Church (located close to Jefferson City, MO). 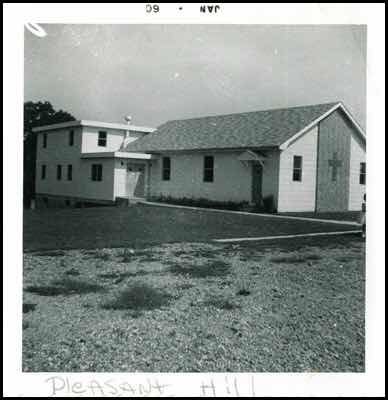 Those who know me well, know the story well. The significance of the date: I met Russell Ford that day. From that day to this (literally), he has been my only love.
But this story has a theme that is different from the re-telling of our love story.
Shortly after Daddy became the pastor, the church ordained some new deacons, including Russell’s dad, Joe Ford (far right In the picture below). Among the men already serving as deacons was Russell’s maternal grandfather, Cecil Scott (fourth from the left). My dad, R.V. Wilson, is standing behind the deacons.
(By the way, Russell is also an ordained deacon. #legacy )
(The picture below is from a digital scrapbook album that I made for Russell’s parents several years ago.) 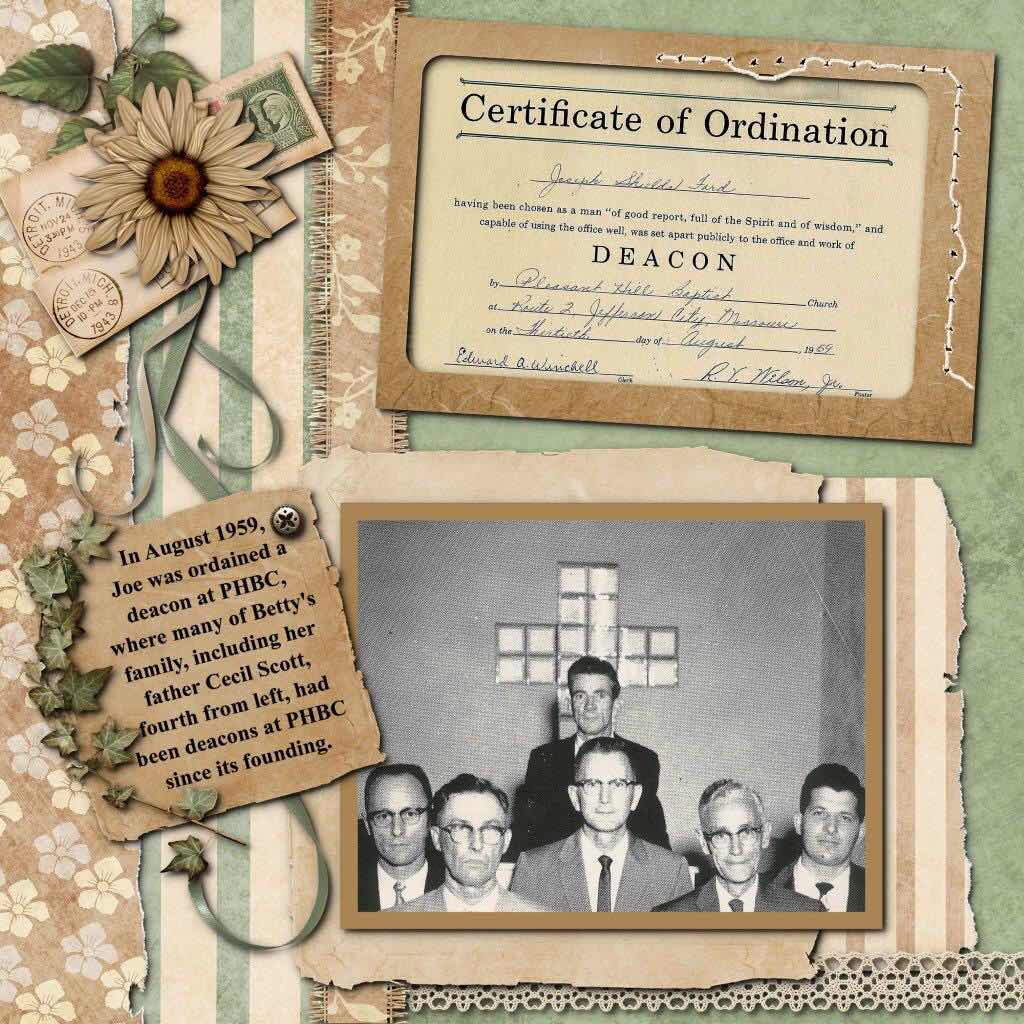 During many of the years that her husband served as deacon, Mayme Scott (Russell’s maternal grandmother) made the unleavened bread for the Lord’s Supper services. That recipe was passed down and archived in my sister Janene’s collection of family recipes.
~~~~~~~~~~~~~~~~~~~~~

Mix. Then knead and knead and knead. Using a rolling pin, roll it out as flat as you can. Cut it into tiny squares. Bake at 250 degrees for 20 minutes.

Fast forward to last week. Here we are in the middle of a global pandemic, and churches are not assembling. Our church, Go Church, in Ridgefield, WA, pastored by our son, Mark Ford, would be observing Palm Sunday in an online service (true for most churches in America).
Mark gave the heads-up that our service on this Sunday before Easter would focus on remembering the cross and would include an observance of the Lord’s Supper, which he would lead online. He suggested that we could each participate in our own homes.
Russell and I, being in the *ahem* “at-risk” group (age), have been self-isolating, not even going out for groceries, as we are well stocked. So, to prepare for our participation in the Lord’s Supper, we would not be purchasing the “bread” anywhere but rather decided to make Grandma Scott’s Unleavened Bread.
I halved the recipe (didn’t even need that much, but any smaller amount would’ve been too difficult to work with). It turned out great. 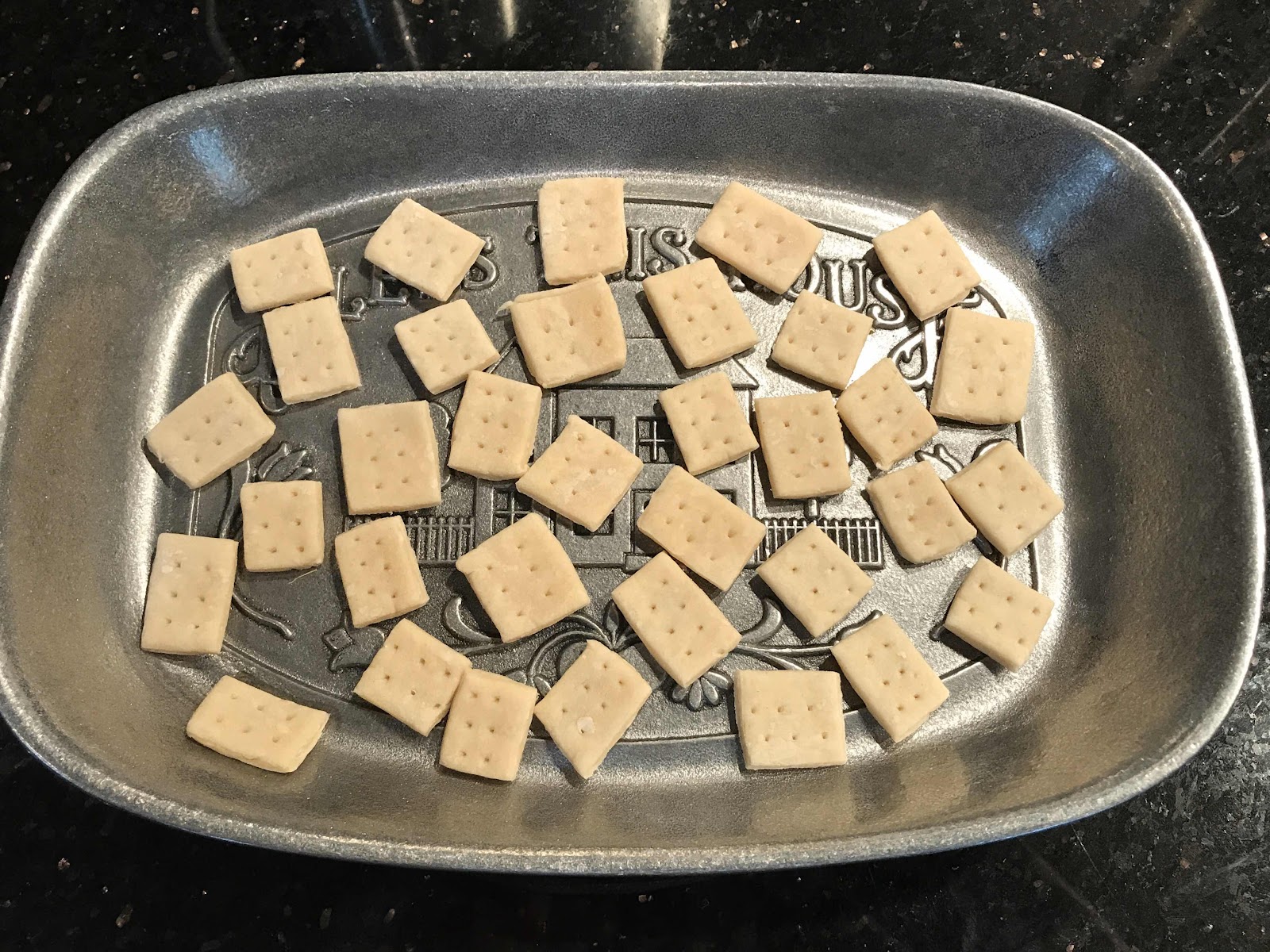 Now, what to do about the juice...
We remembered that we had bought a variety flavor case of GatorAde, a suggested staple for those self-isolating, because of the electrolytes. Guess what—one of the flavors was grape. So there you have the juice for the remembrance service! 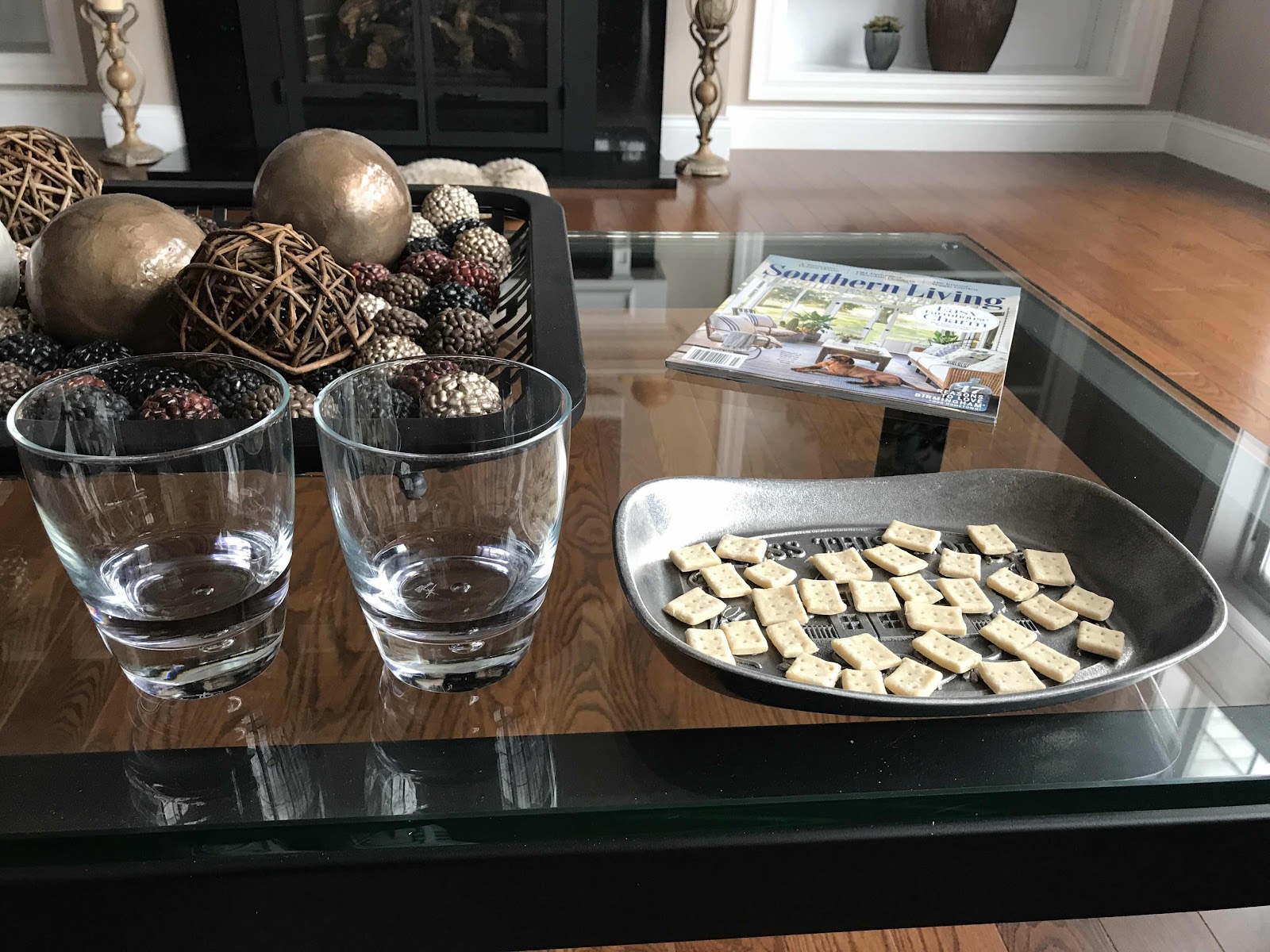 As Mark pointed out in his sermon, this will undoubtedly be an observance of the Lord’s Supper that we will always remember. And the Go Church - Ridgefield service (Facebook Premiere) was the most meaningful service I have ever experienced.
“This do in remembrance of me,” a directive, for “as oft as you do it,” to remember what Jesus did, willingly, on the cross, to pay the price for our sins (my sin)—for anyone who is willing to receive His gift of salvation.
#PalmSunday #InRemembranceofMe #LordsSupper #unleavenedbread #legacy
Posted by Barbara at 4/06/2020 01:33:00 PM

Wonderful memory. I also remember the many times your dad helped us when we were new to the state.. something we didn’t know?Call Mr. Wilson.

Thank you, Dr Twila. It always touches my heart when someone remembers good things about my dad, and I still hear comments fairly often, which is amazing to me, since he passed in 1988. Whether in his role as pastor, or as Director of Teacher Certification for the State of Missouri, he left a positive influence on so many. Thank you for taking the time to comment!

Mom, this is very very special. Love you.

Thank you, Son. The family legacy of ministry is just so profoundly special.

Barb, this may not go along with this particular memory. Not sure the story was about your mom or dad; but it has stuck with me all these years; because you described it so beautifully. As I recall, one of your parents, was in the hospital -- not doing well -- and you and yours siblings surrounded the bed and began singing a hymn. Can't remember the hymn, but do carry that special memory you shared with me on one of our many IBM trips. Always thought, "what a thing to be surrounded by your family...in song and love." You may not know this, but I am soooo glad our paths crossed in this old world...you are one special person. Love, Vicki

Oh my goodness, dear friend Vicki, I had no memory of sharing that story with you, but we did share a lot of personal emotions and feelings on those many trips we took together. So, I’m not surprised I shared it with you. But I’m very surprised that you remember it, and I can’t tell you how much it means to me that you are glad our paths crossed, and I am so very glad also. Yes, it was my dad, that pastor in the picture on this blog post. He was in ICU, in his last days on this earth in the spring of 1988, and we most definitely were all around his bed singing, “The Blood Will Never Lose its Power.” Very sweet memory for me, and I’m glad I shared it with my sweet friend. Thank you for taking the time to share this comment. You are also very special!