Leaving the Jar {Bible Art Journaling, In the Word} 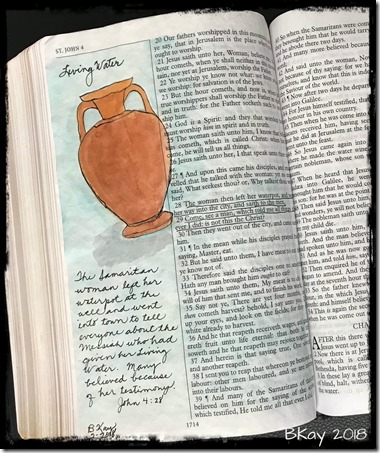 In John 4, we are told that Jesus intentionally went through Samaria on his way to Galilee. Near a town of Samaria called Sychar, near the property that Jacob had given his son Joseph, Jesus sat down to rest at Jacob’s Well. [Side Note: this was one of the more memorable sites for me, that we visited during our trip to the Holy Land in 1977. The well is still there, and we went down inside the cave where the water flows.]

When a woman of Samaria came to draw water, he asked her to give him a drink. She was amazed that a Jewish man asked for a drink from a Samaritan woman, as, she said, Jews do not associate with *Samaritans. (In fact, they usually avoided traveling through Samaria.)

[Side Note: I wonder how it was obvious to her that he was a Jew—how was their appearance different? If so, her amazement must have been immediate when she saw him, even from a distance.]

Over the course of their conversation, he offered her living water, eternal life. “But whoever drinks from the water that I will give him will never get thirsty again.” (v 14)

After she more fully understood his offer and realized that he was the Messiah (how else could he have known all about her?), she “left her water jar” and went into town to tell all the people. Many believed. They asked Jesus to stay longer than he had planned, and he did. Many more believed. This woman became a missionary immediately after she received Jesus as the Messiah by faith.

Somehow, it seems significant to me that John records that she “left her water jar.” She forgot what she came for…she came for physical water, but the living water that she received was worth so much more than the water she came for… Do I need to leave my water jar at the well and walk away with the more valuable gift?

*More information about the rift between the Jews and the Samaritans can be found at GotQuestions.org, here.