On October 21, hubby and I were walking at Indian Camp Creek Park, a short distance from our home. In the landscaping along our way, I spotted this rock. 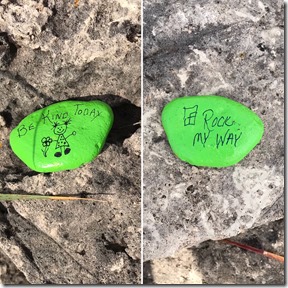 I was curious. I left it where I found it, and looked up the Facebook group referenced on the back. Who knew? It was a group out of St. Charles, MO, with over 10,000 members. Really? Looking through the posts, and in my subsequent research, I discovered this has been a “thing” for quite a while. I am surprised that I didn’t know about it, through some of my other art/craft groups…but I learned that the “craze” is an extension of the Kindess Rocks Project.

Hooked. Decided this would be something I could do with my art that would be more fulfilling than just painting in an art journal that I will eventually toss. My intent will be to inspire, comfort, or be a positive blessing. Many of my rocks will contain a Bible reference.

I learned that my area has sort of gone off the deep end with painting and hiding and finding multitudes of rocks, rather like an Easter egg hunt. For me, I want the rocks to have meaning and to offer inspiration. I will not “drop,” as we say in the rock painting world, my rocks just anywhere, but maybe in locations where someone might be contemplatively walking or whatever (walking trails, parks, etc.). I would also like to leave them as we travel, which will be especially fun with our RV travels. It will be a challenge to see how many states I can “rock.” There are rules against placing them in state or national parks, but there are plenty of other places of nature. That’ll be my goal. I will also be fine with keeping as many of them as I would like, for now.

So, right away, after finding the rock (which I would have re-hidden had I understood “the game” at that point), I was ready to go rock hunting, to find some good ones to paint. That very day, as Russell was buying chat at our local Outdoor Emporium, he noticed a big “bin” where there were rocks for sale for rock painting (cheap). Seriously? I bought my first 10, came home and applied primer (my old favorite gesso, from my more active mixed media days).

I researched Facebook groups, joined several, and started to learn about the techniques, discovering it is basically the same art as I have done before, only on rocks instead of on paper.

I learned that most people’s rocks are never reported found. The emphasis is on the giving, not the receiving. “They” also say that if it is nice art work, the person who finds it may well keep it, and that’s just fine. If I want to offer the possibility of someone reporting their find, I need to label the back. 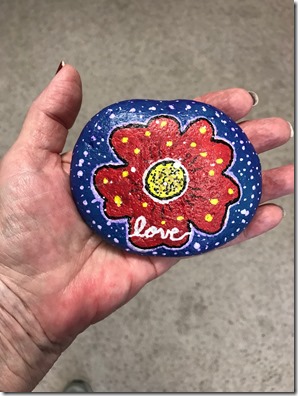 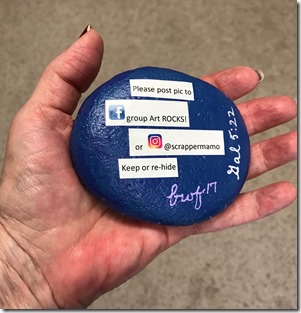 I placed it in the same park where I found my first rock. 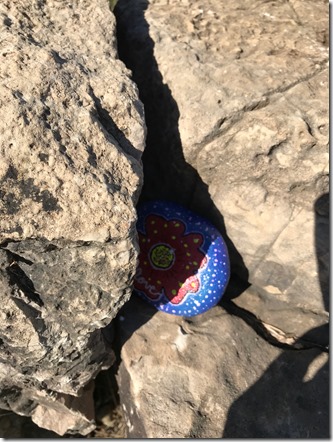 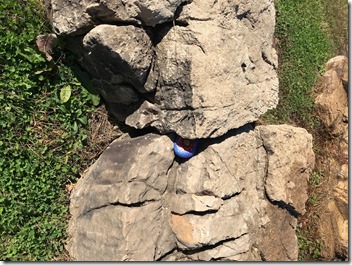 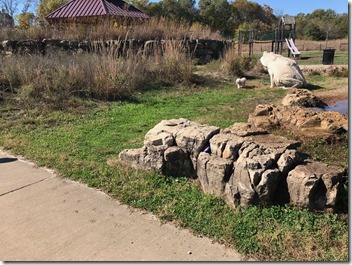 So far, no one has used the contact info to let me know it has been found. That’s okay. I hope someone was inspired.

I decided to do several of my first ones on the fruits of the Spirit (Galations 5:22-23).

Here are numbers 2, 3, and 4. I may keep these, at least until we travel where I can drop them in new places. 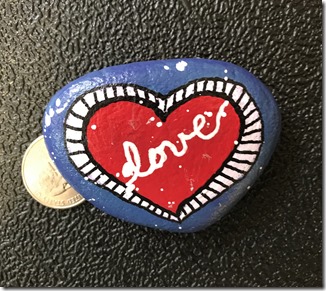 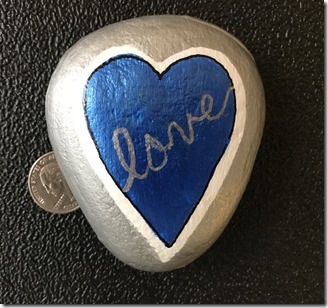 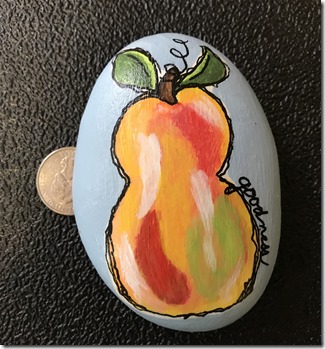 I noticed on the Facebook groups that people usually take the photos of their rocks with a quarter, obviously because just from seeing a photo with no perspective, the rock could be 2 inches, or 20. Most of mine will be about the size of my hand.

Anyway, fun new project/hobby that hopefully will allow me to be an inspiration to someone, somewhere.

Don’t think I have seen you every first rock before. Pretty! It’s one of my favorites.