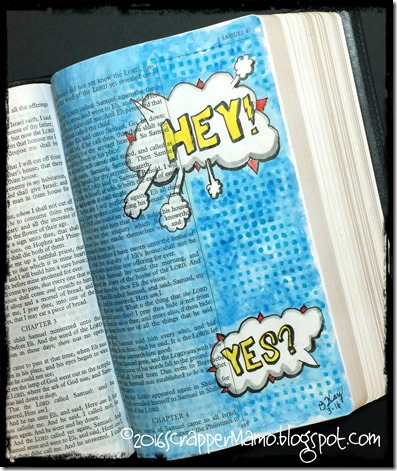 I love this story in the Old Testament about a young man who had been dedicated to God and was spending his growing-up years in the temple, with his mentor Eli. I am struck that Samuel is described as “ministering to the Lord in the presence of Eli.” Here was a young man whose heart desired to serve God.

When God first called out to Samuel, it wasn’t clear to the young man that it was God’s voice. He ran to Eli and answered, “Here I am,” thinking the call was from Eli. When Eli realized that Samuel was actually hearing God’s voice (even though “the word of the Lord was rare in those days”), the wise old man told the young man that it was the Lord calling and to answer Him the next time He called . So, then when the Lord called again, Samuel answered, “Speak, Lord, for your servant hears.”

I just think it would be awesome if my heart would always be in the “state” of desiring to serve God, so much so that I would always recognize His voice and would always answer, “Speak Lord, for your servant is listening.”

6 And the Lord called again, “Samuel!” and Samuel arose and went to Eli and said, “Here I am, for you called me.” But he said, “I did not call, my son; lie down again.” 7 Now Samuel did not yet know the Lord, and the word of the Lord had not yet been revealed to him.

8 And the Lord called Samuel again the third time. And he arose and went to Eli and said, “Here I am, for you called me.” Then Eli perceived that the Lord was calling the boy. 9 Therefore Eli said to Samuel, “Go, lie down, and if he calls you, you shall say, ‘Speak, Lord, for your servant hears.’” So Samuel went and lay down in his place.

10 And the Lord came and stood, calling as at other times, “Samuel! Samuel!” And Samuel said, “Speak, for your servant hears.”

I am a newbie to Bible journaling, though I have followed blogs and wanted to for some time now. Thanks for posting your Bible journaling. You are so creative and I love seeing it.

I am a newbie to Bible journaling, though I have followed blogs and wanted to for some time now. Thanks for posting your Bible journaling. You are so creative and I love seeing it.