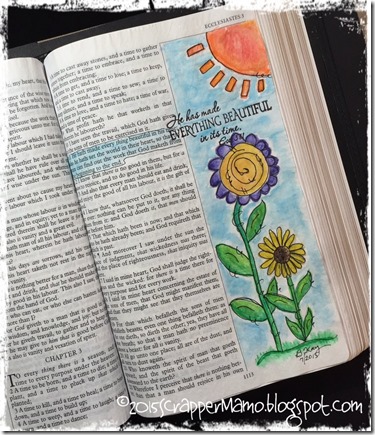 I love this passage (I say that a lot; I mean it every time). The KJV says “he hath made every thing beautiful in his time.” I love that, because it reminds me that it is all about His timing. What does not seem beautiful at all today may be breathtakingly beautiful at a later time (an image of a caterpillar comes to my mind, because I don’t like the picture of anything that resembles a worm…but we all know what happens to a caterpillar in time).

Most other translations say “in its time.” I don’t think of it any differently than “in His time,” because it’s still God’s timing. The time for something to be beautiful is up to God. He is after all the Creator and Sustainer of Life.

Often, a part of a verse that is memorized and quoted by many will be within a passage whose entirety gives a much broader picture. That is the case with this entire verse:

He has made everything beautiful in its time. He has also set eternity in the human heart; yet no one can fathom what God has done from beginning to end.
Ecc 3:11 (NIV)

You explain things so beautifully and clearly! That's the main reason I follow your wonderful blog. Thank you! I hope you're having a very relaxing and enjoyable summer. Please don'e stop creating in whateven what you do.

I pray that God blesses you always,
Nancy

You explain things so beautifully and clearly! That's the main reason I follow your wonderful blog. Thank you! I hope you're having a very relaxing and enjoyable summer. Please don'e stop creating in whateven what you do.

I pray that God blesses you always,
Nancy

Nancy, you have lifted my spirits today. Thank you so much for the encouragement!