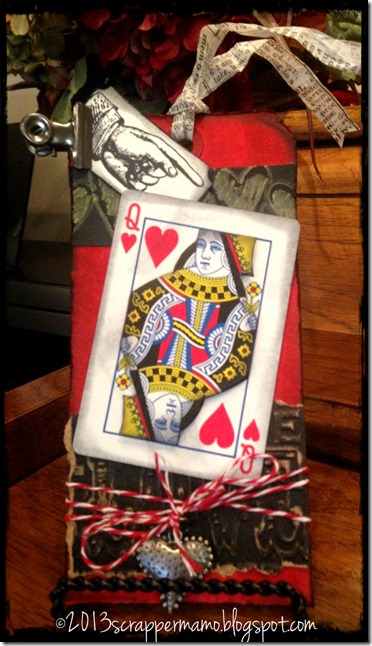 Even though I already made a tag using the Queen of Hearts as a Valentine symbol, that tag (using the King and the Queen of Hearts cards) was off the top of my head and nothing at all like Tim’s February 2013 tag, except that both tags use the image of the Queen. So, the “real” Tim Holtz February tag is this one.

Again, I do not own the darling blueprint stamp of the Queen of Hearts, so I once again used the actual playing card. I did cut out the Queen from a second deck and popped her up on top of the first card. In retrospect, I should have double-popped her, as the dimension is not visible from the frontal view. 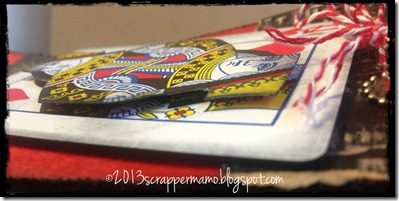 In fact, I “winged it” on several aspects of the card, but since Tim encourages that, I can still claim it as the 2013 February tag (MY take on it!).

I am linking this project to Anything But a Card Share the Love Challenge. Also linking to Simon Says Anything Goes.

I love it! I really like how you used the card since you don't have that stamp. Awesome!!

This is a fantastic take on Tim's tag! Awesome idea to use the card! And I love the heart charm also! :)

Fun tag! Thanks for sharing it with us at the Simon Says Stamp challenge this week!

Very nice tag and use of embellishments.

What a terrific Tag with so many interesting things to look at.Thank you for joining in at Anything But A Card this time.

Fabulous take! Love the real card and how you've made it 3D...hubby might complain about 50 card deck but too bad, it's all about the Art!

Beautiful tag. Love that you used an actual card.

Love your take on the tag and the way you've used the two layer card technique. The little heart charm is gorgeous. Thanks for joining us at Anything But A Card this time.

Awesomeness and I loooove the use of a card!!! Thanks for joining us at Anything But a Card :) :) :)

I love all the dimension. Thanks for joining up at ABAC.