Of Fireflies and Toy Stories 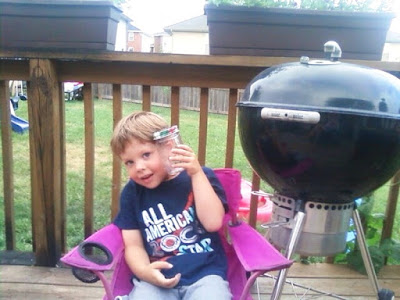 My littlest grandchild, four-year-old Dawson, has begun to enjoy talking on the phone with Mamo. What more delight could there be in a Mamo's heart than for one of her precious grandchildren to want to talk with her. So, at this point in time, Dawson and his Mamo have a "mutual admiration society." He likes to talk to me, and I like for him to talk to me. Last evening, his mom sent me a text with a photo, and an audio note from Dawson that he had caught some fireflies. Later, he called me. We had quite the conversation about the fireflies ("They are orange and green and red.") and his first movie ("Was it Saturday, Mommy? Yes, it was Saturday."), "Toy Story 3."

He loved the movie, and he asked me "What was your favrit movie when you were a kid, Mamo?" I didn't have the heart to tell him I didn't really remember getting to go to a movie when I was a kid, but I do remember getting a television for the first time when I was about 8. I saw a "movie" on that TV, so I said, "Peter Pan." He said, "I like 'Peter Pan.'" He wanted to know what was my favorite book when I was a kid. He didn't seem to understand "Tuffy the Tugboat" or "Babar the Elephant," but we found common ground a bit with "Peter Rabbit." Anyway, WHAT FUN!! At tne end of the conversation, his mom told him he could talk to Mamo some more later. "How 'bout tomorrow," he said.

This is so sweet. I just love listening to him talk to you on the phone. From my end, it sounds like a couple of old friends chatting. I love it.

Awww that's so cute!Oh no he's growing up fast!