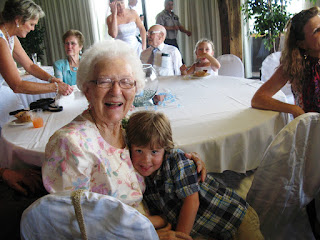 One of my favorite sermons that my Daddy would sometimes preach (he passed away in 1988) was "Little Things Mean a Lot," the title taken from an old song. I won't go into the points of that message today (a good one, by the way), but that topic, of "little things," comes to my mind today.

Sometimes God shows Himself in HUGE ways. Quite often He does that, actually. And I'm always amazed at His awesomeness and usually remember to praise Him and thank Him at those times. But sometimes, like today, He shows Himself in smaller ways, and I don't want to miss those reminders of how He cares about me and takes care of me and those I love.

Just this morning, He sent me a couple of reminders of his presence. They are "little things," but I love these "little" reminders of His grace.

(1)This morning, my little grandson had outpatient "surgery" to clip a shortened frenulum. The procedure did not require general anesthesia, and we knew it was not going to be anything "major," but his mom (my daughter) and his Mamo (me) were still emotional and stressed about our little guy. God answered our prayers. The procedure only lasted 10 minutes, and Dawson was shortly enjoying a Popsicle as he rode home with Mommy and Big Sister, having made it just fine through the surgery. (Mom made it fine, too--another answer to my prayer!!)

(2) Last night my mother (82, independent and active) lost her cell phone (her "little Barbie phone," she calls it, as the cell phone and the calling plan were a gift from my husband and me a couple of Christmas-es ago). Now, it might not seem like a big deal for someone to lose a cell phone. But, Mother has so "latched on" to her phone that it has become somewhat of a security blanket for her. Even though I told her I would bring a replacement phone to her when I see her this weekend, that didn't help. She wanted her phone. She was literally physically ill with disappointment that she had lost her phone. Now, playing into this level of stress for her is the fact that she is pretty seriously visually impaired, and it was very challenging for her to learn how to use this phone, and she could barely stand the thought of having to learn to use a different phone. So, since her frantic call to me last night, yes, I have prayed that God would help her find the phone--not because the cell phone is a necessity of life, but because of how extremely upset she was about it. This morning, she found it. With tears of joy, she told me, "I found it, I found it, thank you, Lord." And she meant it. I thanked Him, too!

So, little things? Yes. I have several huge prayer requests going on in my prayer time currently, too. But, I don't want to miss these "little" answers that God sends my way to remind me that He has those things covered, too!!

Very nice thoughts for sure.

The little things are important for sure and it's very easy to overlook them and take them for granted...
P.S. Loving your new designs on your blog! :D

That was beautiful Barbara. It is always good to be reminded how He is in EVERY detail and truly, truly cares. Thank you for such a lovely story. How precious. You need to do a layout with your mom and her "Barbie" phone. BTW, the blog looks BEAUTIFUL! Blessings, Melin