Another for the “Books I Love” List {My Book Corner}

While we were in Washington, my granddaughter Tory (aka Delightful Joy Girl), home from missionary service in Mexico and staying with her parents while she transitions to “what’s next,” helped me unpack boxes in the kitchen of our new house.

Tory and I have shared a lot of time in the kitchen, and I sort of think of it as our special place (for cooking, baking, having coffee, and talking).

Here we are taking a break on our new patio. We had not only unpacked and organized all the kitchen but also baked a Wacky Cake. 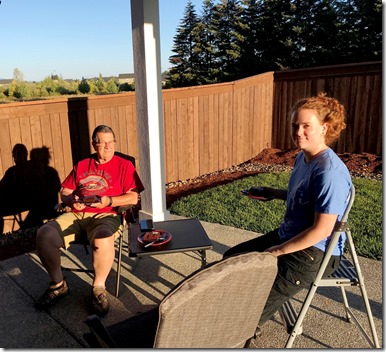 While we were visiting, Tory shared with me about a book that is having a huge impact on her prayer life. It was a Christmas gift from her Aunt Sharida. The book is known by many but was new to me, Fervent by Priscilla Shirer. Of course, she had no sooner mentioned it than I had ordered it from Amazon Prime and received it two days later.

I am still reading it, but I concur with Tory’s review. Priscilla provides strategies for dealing with the enemy in areas of life where he especially wants to gain a stronghold. It is a GREAT read.

I particularly love the chapter on “Your Family.” She presents thoughts from the viewpoint of Satan. It’s very interesting to be reminded so clearly of how the enemy thinks as he proceeds to attack believers.

Here’s my favorite part from the Family chapter:

“Is it your children? The Bible says our children are ‘like arrows in the hand of a warrior’ (Ps 127:4). We raise them up to shoot them out into the culture, bearing the image of Christ to the world.

“Sounds again, then, like a place that would qualify as a major area of concern for an enemy who doesn’t want any vestige of Christian valor and virtue running loose out there where…I don’t know, they might take a bold stand of faith and influence around their college friends.

“Might pastor a church or run a business or become involved in missions and ministry opportunities that honor Christ and actively serve hundreds of people. Worst of all, they might marry and raise up a whole other generation of little Christ followers, keeping your family burning red hot on enemy radar long beyond your lifetime, spinning up a legacy of faith that spirals forward undaunted into the future. Your enemy can’t be having any of that, now, can he?

“So don't be surprised when he starts coming after your kids. And don’t think it’s all because they’re being headstrong or peer dependent or careless or lazy. Satan knows the parts of their character—both their strengths and their weaknesses—where he can worm in and try stunting their growth, their potential, and their confidence.”

Wow. If you know me, or have read my posts for a period of time, you know that I’m all about legacy. You know that I am blessed to have children and grandchildren (and now a great grandson) who are serving God on the battlefield of the world (pastor son and wife planting a church, grandson worship pastor, his wife in preschool ministry, granddaughter missionary, daughter counselor and son-in-law strong layman and influential community leader…

Ya think the enemy might have a target on my family? Of course (and likely on yours as well?)…so yes, I need reminders of strategies to come up against the enemy who is powerful, but not all-powerful, as my God is.

So, I recommend this book, Fervent: A Woman’s Battle Plan for Serious, Specific, and Strategic Prayer by Priscilla Shirer. 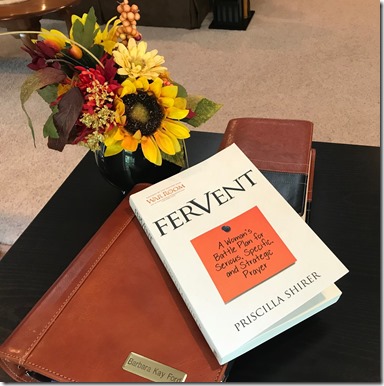