This year marks the 50th anniversary of Russell’s Southwest Baptist College (now Southwest Baptist University) graduating class (1967). On September 23rd, we joined several of his classmates (and their spouses, several of whom were in my graduating class of 1969) on campus, for the 50-Year Club Luncheon, where the class of ‘67 was inducted, followed by the 1967 Class Reunion. 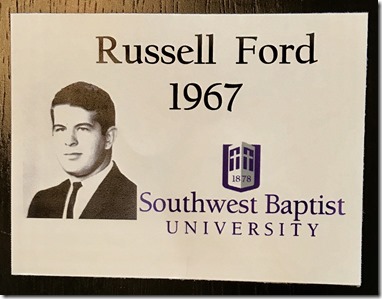 What a great idea to put the yearbook photo on the nametag, so that everyone could recognize their classmates—50 years brings a lot of change! 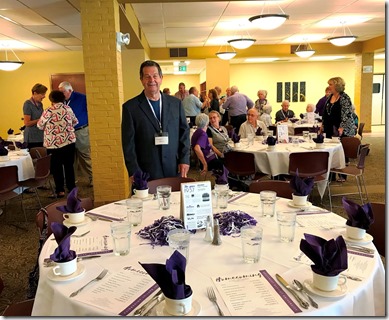 The luncheon tables featured a centerpiece with information about 1967 on one side and 1957 on the opposite side. 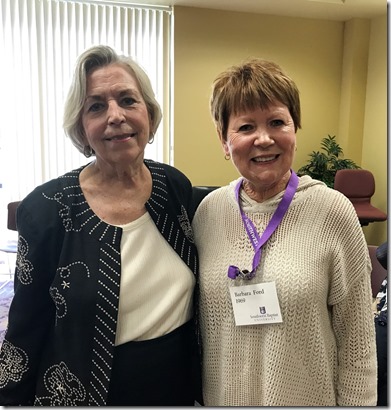 I always enjoy re-connecting with one of my classmates, as her husband was in Russell’s class. Sandy McDonald Jones and I suffered through Chemistry during our last summer at Southwest. She always says that I got her through the class, but I just remember that we both hated it and that we studied together. 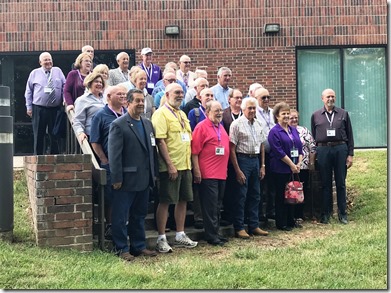 This is the group that was present at the reunion, and Russell remembered, and visited with, most of them. I was proud of Russell, youngest-looking one there (I’m not biased). When the university president was handing out the 50-year-club pins, he said to Russell, “Your hair’s too dark [for this pin].” He is blessed to be naturally (genetic) late to gray!

Sadly, we learned that one of Russell’s best friends had passed away in 2009. 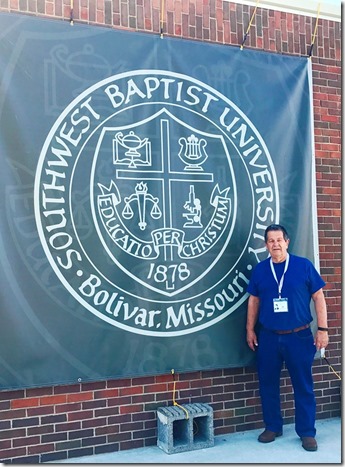 It’s always a Sentimental Journey to travel down memory lane at reunions. We feel very blessed to have been a part of the rich history of this university, and it was an honor to be a part of a group that included so many successful contributors to society (and, as a side note, amazing to know how many of the couples have also been married around 50 years!).

Very cool. Nice to see this.