Through Misty Eyes: A Reminder From a Stranger {HeartStrings}

Yesterday my husband and I enjoyed a late breakfast at one of our favorite breakfast/lunch restaurants in Vancouver (WA). As we were finishing our coffee, my attention was drawn to a table across the way from me, directly in my line of sight. A middle-aged woman put her arm around the older lady seated next to her. The younger woman hugged the shoulders of the older woman in such a way as to bring their faces close together. Then the younger woman affectionately kissed the cheek of the older woman.

I observed that the women bore a resemblance to each other, enough to make me believe they were mother and daughter. Both women were dressed nicely, with pretty jewelry and make-up, signaling to me that they both considered it a "special occasion" to have breakfast together.

Tears came to my eyes, and I wanted to go over to the table and say to the younger woman, "Yes...you are doing the important thing. Express your love for your mother while you have her with you. These times of being together are precious--how precious will only be known to you after they can no longer occur. So, show your mother that you love her, while you can. It is good for both of you."

But, I didn't go over to her. I know myself. My attempt to choke out the words through the tears would have not been successful.

And so it was that, through my misty eyes, I was reminded by this stranger, of the truth reflected in a line from a poem that came to my mind. (I researched the poem, as I could not remember anything beyond the first line.)

"It is a poem written by English Cavalier poet Robert Herrick in the 17th century. The poem is in the genre of carpe diem, Latin for seize the day. It goes as follows:

“Gather ye rosebuds while ye may,
Old Time is still a-flying;
And this same flower that smiles today
Tomorrow will be dying." 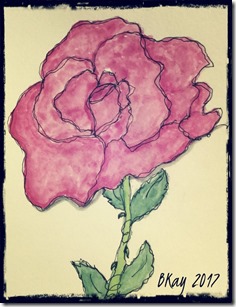 Thank you for sharing this moment of great beauty in the midst of a dark world.