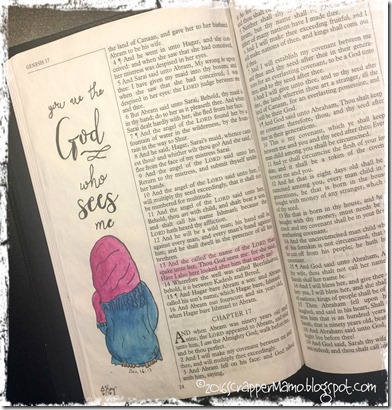 I have begun a new Bible Study, designed to use with Bible Journaling. It’s a free study, with prompts, downloads, etc., and so far I am loving it. High quality art examples and in-depth Bible study. It is found here, at Sara K. Bouter’s web site called Seasons Illustrated. This study is called Women of Valor (love it!).

Week 1’s Lesson is about Hagar.

Here is some of what Sara Bouter has to say about this first week:

“It may be unexpected to begin a study of women of the Bible with Hagar. After all, Hagar isn’t a matriarch, like Sarah. She isn’t the subject of her own story, like Ruth. She isn’t even a free woman; instead, she is a Sarah’s servant and Abraham’s concubine. Hagar’s secondary status is woven into her very name: depending on who you ask, it may mean flight, foreigner, or stranger.1”

“But despite her earthly status and the fact that she is seen as ‘less-than’ in the eyes of man, God sees her, and Hagar, not once, but twice, receives something that few other women in the Bible do: a revelation from God.”

1We don’t know the meaning of the name Hagar for certain because the root word,הגר or hgr, is not used in the Bible. One theory is that it means flight, because it resembles the root of the Arabic word for flight. Another theory is that, because the Hebrew word גר (ger) means a foreigner living in Israel, Hagar means foreigner or immigrant. Lastly, because the phrase גר הגר (ger hager) (used in Exodus 12:49, Leviticus 16:29,Numbers 15:15) literally means “the stranger who is a stranger,” it could mean stranger. Ultimately, we are unsure.

God had a special plan for Sarah (next week’s study). But he also had a plan for the woman who was thought of as “less-than,” Hagar. God saw her in her desperation. He took care of her. My God is the God who sees me. He will take care of me.

When I begin a 12-week study, I do not like to fall behind, especially early-on. So, uncharacteristically for me, I used the download printable provided by Sara, to trace for this page. I do not have a problem with tracing but rarely do it, as I usually have time to come up with my own idea, but this has been an unusually crazy week. So, I was happy to have Sara’s nice artwork to trace for my Bible page on this one!