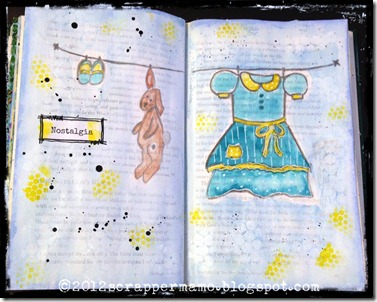 Sometimes my heart yearns for the simpler times. Having lived for 66 years (*gasp*), I have a perspective that today’s 30-somethings will not have when they reach their sixties. Although I pride myself on staying up on at least some of the most productive aspects of technology (I am blogging right now, after all)—things like iPhone, iPad, twitter, Instagram, GPS, google—at the same time, I can well remember the days when postal mail was the only way to communicate outside your own home (well, eventually we had a phone when I was growing up, but much of my growing up years, as well as my early married years, not even a phone). Oh, and inside your own home? We talked. With our voices. And I don’t mean dictating to Siri. I mean two-way communication, one-to-one.

When today’s teens reach their sunset years, they will not have the memories of “simpler times” that often bring me peaceful moments, just in the remembering. They will actually never have had a “simpler time” as I would define it. Oh, but of course, everything is relevant; whatever “state” they find themselves in, at that age, it is likely that our “now” will be defined by them as “simpler times.” That’s somehow sad to me. It’s more than sad, actually. It’s frightening.

I’m all about progress, and I generally have a positive outlook. But sometimes I wish I could just hold up my hand and say, “Stop for a minute. Breathe. Enjoy a moment of silence. See how long you can go without reaching for your phone or iPad.” Seriously, I fear we have a very real problem. Now, I admit, to an extent, I’m right there. I never sit down without my iPad AND iPhone handy. I might want to check communications. I don’t do personal facebook, and I don’t play games on the devices, but I might want to watch another crafting video, or see if there are any new photos from family on Google Plus or Instagram. Not so bad. But every time I sit down, even on the deck, to relax with coffee? Ever notice that rarely does someone lose an iPhone or leave it behind somewhere? It’s because they just looked at it a minute ago.

Sometimes my heart hurts when I see, what seems to me the vast majority of, children holding devices and pushing, swiping, tapping—instead of interacting with real people in real life. When they reach 10 or so, they’ll have their own facebook page, and that will expand what they will be able to do with their device. I am not saying that children should never be allowed to use iPads—I think it can be a great brain exercise (much better than zombie-like TV-watching). But I do suggest balance, maybe limiting the amount of time they spend on something like this (I do see some parents exercising that sort of control, and I think that’s great).

When my children were growing up, we parents were cautioned not to let the TV be the babysitter for too much time during the day—a Sesame Street now and then, and maybe an hour of cartoons, and then Saturday morning cartoons for sure. But it seems like no one is noticing that our children today are not learning social skills because they have a device in their hand almost all the time. Parents are “off the hook” on supervising their children. The kids are in their seats and quiet (mostly). It’s quite common to see this, even at tables in restaurants. But, what’s the big surprise in that—their parents are also on their own devices. Really? A family of four, seated at a table in a nice restaurant, and all four of them are on their phones. It is considered “cute” when a child in a high chair knows how to use an iPhone to play a game. This is downright scary to me. Fast forward. What will that “child’s” grown-up world be like? (I recently read a news report about how many young people exiting college have their device with them in an interview and may even text during an interview. Seriously?) Last year I was in a Starbucks where a lady literally pushed past me (seemingly in desperation—I thought something was wrong) to get to a table and get her laptop set up and facebook loaded. THEN she could breathe for a second and order her coffee. It reminded me of a smoker who cannot wait to get outside to smoke.

I don’t have the answer. And I’m not the only one who is seeing the problem. But I do see it as a problem, and I try to find a balance between enjoying the benefits (and fun) of modern technology while still being aware of the dangers and negative results.

Of course we want our children to be “up” on the latest technology, and we do not want them to be behind as they enter high school, college, and the work world. So, clearly, I am not saying they shouldn’t ever use devices such as iPhones and iPads. And I do realize I am generalizing here. There are absolutely exceptions and parents that I would put forth as examples on achieving a balance.  But I am observing these kinds of things (out of balance) SO OFTEN that it almost seems like an epidemic.

I used the work of a friend as inspiration to sketch and watercolor the above art journal project (on the pages of my altered book). It is nostalgic to me and reminds me of simpler times. It brings a sweet memory to me of my maternal grandmother telling my sister and me bedtime stories. She would make up the cutest stories, and I would have such a lovely picture in my mind. Her stories always included little girls in their frilly little dresses, bows in their hair, going on a picnic.

What about bedtime stories? Is there still room for imagination?--for creating a picture in your mind, instead of seeing someone else’s idea on a screen? I hope so.

I totally agree!!! I too long for simpler times, although I love what technically can do. I feel it is causing major social problems even though there are social networks...LOL!!!

Wow! I was just sent this link that is extremely scary; I didn't even realize there was this kind of "proof" for my theories. This is from today's New York Post: http://www.nypost.com/p/news/international/japan_proposing_internet_fasting_WjxuYxxn5Fp3SO6xNhxkMI